MEMORIES: MY FAMILY ARRIVES IN YANBU 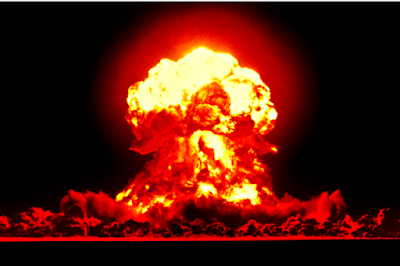 MEMORIES, 7th Installment
(Scroll down for earlier installments of MEMORIES
and for CONVERSATION WITH AN ATHEIST)

It was 1981. Two years before the first cell phone came on the market. The only way I could communicate with anyone back home, other than by mail, which seemed to take forever, or mental telepathy, a skill I hadn’t perfected, was to go to the Company Communications Center and submit the telephone number and name of the person I wanted to call on a piece of paper to one of several young men sitting at one of a row of desks across from eight or ten phone booths lining the other side of the room. After submitting the paper, I had to sit or stand, along with several, other ex-pats and wait. Eventually, a phone would ring in one of the booths, and if it was for me, the young man who took my sheet of paper, would motion to me and point at the phone booth where my call was coming through. The voice on the other end sounded faint and far away. Of course, it was coming from the other side of the world! If you were lucky, you would only get cut off once or twice before you could complete your conversation.

Just before Jacqui and Joshua arrived from California, I was allowed to move from the single-housing barracks into a three-room pre-fabricated house with plastic walls, in Ex-Pat Village. It had two rooms: a living room and kitchen in one room, and a bedroom, and bath room in the other. After the broom-closet I had called home for more than two months, it seemed like luxury! There were two heavy-duty air conditioners mounted in the wall of each room. One running almost continuously, because the outdoor temperature rarely got down to 70 degrees Fahrenheit, and was often over 100, the second was a backup. Temperatures regularly reached 120 to 130 degrees Fahrenheit in the summertime. 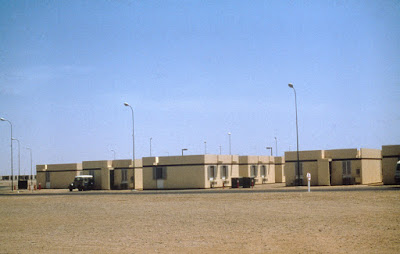 My battle with management continued non-stop. The day before I was to go to Jeddah to meet Jacqui and Joshua as they entered the Kingdom for the first time, my supervisor gave me an assignment that would take two or three days to complete, demanding that the completed task had to be on his desk by the end of the day. I did what I could in the time I had and, the next day, before leaving for lunch, I put it on his desk with a note letting him know that I was going to Jeddah to pick up my family and that I would finish the task when I returned from Jeddah.

I went home, grabbed a small over-night bag I had packed the night before, and jumped on the mid-day bus to Jeddah. In my haste and eagerness to see my family, I never thought to get my my papers from Admin. In Jeddah, I reserved a room in the hotel and contacted Saleem to take me to the airport and help Jacqui get through customs.

A new airport was being built in Jeddah, and it was nearly finished, but arrivals were still coming into the old airport. It was hot and crowded, and I had to wait for Jacqui and Josh to get through Customs. I could see them from one floor above, and to one side of the arrival deck. Saleem was dragging the luggage to a holding area while Jacqui, holding onto our three-year old to keep him from running off into the crowd, counted off the pieces of luggage as they came through from inspection. I couldn’t hear what they were saying, but I could see Saleem asking, time after time, “Is this the last?” and Jacqui shaking her head no, after which he would roll his eyes and drag another large suitcase, box or trunk toward the waiting company car.

Jacqui knew there were no supermarkets in Yanbu, so, in the many letters she wrote during the drawn-out wait for visas, she asked me to tell her what supplies were hard to come by. What I didn’t know was that she was stocking up on the things I mentioned as hard to get and had brought them with her. There were large boxes of toilette paper, a year’s supply of rice, and many other things. I think she had 13 pieces of luggage.

We were in the hotel by about 2:00 am, but none of us could sleep. After Joshua finally fell asleep, we talked until breakfast time, catching up. And I worried about how I would get all the luggage on the bus. With Saleem’s help, I managed it and were on our way to Yanbu.

We encountered an unpleasant surprise when the bus was stopped at a newly-erected military checkpoint near the village of Rabigh. It seemed there had been an attempted coup on the House of Saud in Riyadh, and a cache of guns had been found in the Hejazi region. A Saudi soldier who looked to be about fifteen years old climbed into the bus waving a machine gun and demanding papers of all on board.

My heart sank as I realized that I had no papers. I could imagine being led off for interrogation and jail, while Jacqui had to continue on to Yanbu, alone, with all the luggage and our three-year old son. The young soldier spoke no English, so he was not quite sure why I was not producing my papers. The bus driver interceded, telling him that I was an employee of the Royal Commission. But the soldier just seemed to get angrier, waving the gun in my face. Just when I thought I was going to be dragged off the bus, the two wives of a Somali gentleman sitting across from us began to yell at the soldier. The bus driver chimed in, and finally, the young soldier threw up his hands and said “Halas!” (enough) and waved the bus on. Wiping the sweat from my brow, I thanked God, and the Somalis and the bus driver profusely. I sat back down by a visibly shaken Jacqui, and we continued toward Yanbu.

A few hours later, we unloaded in front of our temporary home in the camp. I drug the luggage into the house and collapsed, exhausted. A couple of hours later, I decided I’d better report in. My supervisor read me the riot act for not reporting immediately upon arrival in Yanbu, and for not having the work he assigned completed before going to Jeddah. Too tired to respond to his ranting, I retreated into my office, closed the door and went back to work.

I continued to fight the management and to attempt to solve the raw sewage and batch plant air pollution problems, with little progress on either front. I also continued working on the adaptation of the environmental regulations for Yanbu. This was a project that Company management and the Saudi management counterparts, including the Director General, approved of and wanted completed.

During the 10 and ½ hour days, six days per week that I had to work, Jacqui was virtually a prisoner in that two-room box called family housing. She could take josh and go to the commissary and dining hall, but she had to cover her hair, and be clothed from chin to ankles. We could go to the enclosed family pool after hours, or on the one-day weekend, but she could go nowhere off site without me.

Jacqui was a beautiful young woman with red hair, and the single third-world workers, men without home-leave for their whole 18-month contracts, would stop and star at her, even as covered up as she had to be. This was a nightmare for her. The only bright spots were that she got to spend more time with Joshua than she had in Pasadena, where we both had to work, and the promise of a trip to India.

As the time rolled around when I would be eligible for a one-month “home-leave” we planned to go to India and Jacqui and I began working on making the arrangements with the Company Administrative Office, travel agencies and the Saudi Government officials in Jeddah. The process was tedious to say the least. Finally, we had the date set, the tickets purchased and were packed for the trip.

On the morning of the day before our departure, there was a note on my desk from my supervisor. It said I was not to leave Yanbu until a complete first draft of the environmental regulations for Yanbu and the Kingdom of Saudi Arabia were written and on his desk. This task was weeks from being finished, and he knew it.

This was the straw that broke the camel’s back! The only reason Jacqui had reluctantly agreed for me to take this job and come to Saudi Arabia, was the chance to go to India, a dream we’d had since we first met in Florida.

I grabbed the note and stormed into the Supervisor’s office.

“We’re going on leave!” I sputtered.

“Not until the environmental regulations for MEPA are on my desk!” He glared at me.

My usual calm demeanor began to crumble. I forgot that I could go over his head. After the months of being harassed by this man, I had reached my limit. I got in his face:

“Don’t you yell at me,” he demanded. “Get out of my office and get back to work!” 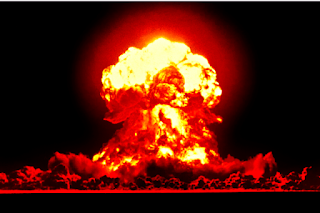 My patience was gone. Angrier than I had ever been in my life, I leaned across his desk.
“I’ll leave your office when I’m good and ready!” I yelled. “We’re getting on that bus tomorrow, and if you do anything to prevent it, your life won’t be worth a plugged nickel!”

It was the first time in my life I had actually threatened to kill someone. It was so far beyond my nature that I was shocked when those words came out of my mouth! But, I was so angry, I was ready to take him out through the wall behind his desk, and he knew it. He shrank back a little and glared at me like a rat trapped in a corner.

I continued shouting, telling him exactly what I thought of him as a person and a supervisor. I ended with: “You are, without doubt, the worst so-called project manager I’ve ever met! Your incompetence makes what would be a difficult job, utterly impossible!”

I crumpled the note in my fist and threw it at him, whirled around and walked out of the room.

The Planning Department offices were in boxcar-like structures with a hall down the middle and several offices on either side, with the supervisor’s office at the end, across from a copier and storage room. When I stepped out into the hall, to my surprise, all my co-workers stepped out of their offices and gave me a standing ovation. Everyone had heard my explosion.

I marched right on out of the building, still with a full head of steam, across the sand and into the office of the new Company Director of Planning, a man I had known in Pasadena.

“I’m going on leave tomorrow, Frank,” I told him, “and when I come back, I’m not working for that S.O.B. anymore! You can transfer me or send me home, I don’t care. But I won’t put up with him for one more minute!”

When we came back from India, I had been transferred to Engineering.