Note: This is second in this series of posts. Scroll down to read the first.

THE NEED TO EXPLORE
©Edward R. Close 2018
I was standing there alone for what was probably five or ten minutes, but seemed like an eternity, until a young man showed up, driving a dust-covered Chevy Suburban. After a brief tour of Yanbu Al Sina’iya (Yanbu Industrial City), which consisted mainly of driving to the “Bird Tank”, a water tower painted blue with white sea gulls all over it, and pointing out where the future refinery and deep-water port were to be constructed, the “Company man”, an Australian named Robbie, dropped me off at the entrance to my temporary quarters. He gave me a key with the number 101 on one side and the same number in Arabic on the other. 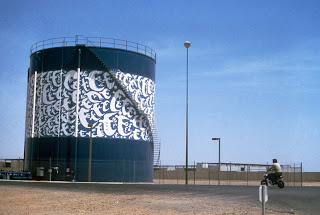 The entrance to the temporary quarters was an Arabesque arch, a miniature version of the grand arch over the entrance to the Industrial City site. Everything was painted white. Two rows of box like structures stood in an enclosure beyond the arch. My room was the first door on the left. I unlocked the door and stepped into a small cubical, maybe 8 feet by 10 feet, with a bunk, a chair, a small table/desk and a peg in the corner with three clothes hangers on it. A single window was over-shadowed by two air conditioners. One droning away, the other on stand-by as a backup. Afternoon temperatures of 120° F plus was not uncommon here in the summer months. After Robbie drove away, I looked around. There was no one here but me.

Robbie had pointed out the dining hall, about a hundred yards away, as we drove up to the temporary quarters location, and said it opened for breakfast at 6:00 AM. It was 4:30 PM as I stood there, and that meant it was 5:30 AM back home in Pasadena. I hadn’t slept more than 3 hours in the hotel in Jeddah, after arriving in King Abdulaziz International Airport about 11:30 the previous night and going through customs. Customs in the Jeddah International Airport was a grueling three hours of mostly standing in line while customs agents went through every piece of luggage, looking for weapons, pork products, alcohol, Christian - or any other non-Muslim literature, and pornography (anything with pictures of the uncovered female form - like, e.g., the lingerie section of a Sears Catalogue). All such things were confiscated. In the hotel, before going to sleep, I read about half of the ornately decorated Koran that had been placed on the desk next to an arrow pointing toward Mecca.

“Well, this is it; the beginning of a new adventure!” I said to myself. I closed the door, set my suitcase down, hung my jacket on the peg and flopped on the bunk. I was sound asleep within minutes. That night, I dreamed of climbing the highest mountain in the range of black jagged peaks looming to the east of Yanbu. Ay breakfast the next morning, I met Giorgio Daher.

Giorgio was something of a wild man. Of Turkish-American origin, from Atlanta Georgia, he looked and sounded a lot like the TV journalist, Geraldo Rivera. He was a landscape architect who had been in Yanbu for a year or two when I arrived; he spoke some Arabic, and he had just purchased a jeep. He and Douglas, a British engineer from London, were two of the friends I made among the 30 or so expatriate co-workers on the Yanbu Al- Sina’iya Project.

There was not much to do within the boundaries of Yanbu Al- Sina’iya during off-duty hours. There was a commissary and a swimming pool, and that was it; and the old city of Yanbu Al-Bahr (Spring on the Sea), about 15 kilometers north, had only two or three shops, and a French-Lebanese restaurant. I was trying to learn Arabic but found it much more difficult for me to get a handle on than any of the European languages.

As the only environmental engineer and planner on the project, I was one of a few “key personnel” who had family status. I was told that it would take about 90 days to get the paperwork in order and bring my wife Jacqui and our 3-year-old son Joshua to Yanbu. In fact, it took quite a bit longer. I had a few books with me and a Rubik’s cube, and I was working on a paper that would become part of my second book, “Infinite Continuity”, but, except for the challenges of the job, after two or three weeks, life in Yanbu became very boring.

Giorgio was a free spirit who would disappear for days at a time, driving his boss to distraction. One weekend, he invited Doug and me to go with him for a drive out of the compound. There was a beautiful white-sand beach, called Al-Sharm, about ten kilometers north of Yanbu Al-Bahr. I had already been there once, on the Company bus. It was a nice change of scenery, and the snorkeling was amazing among the brightly colored fish and coral in nearby tidal pools. But the intense tropical sun and the crystal-clear water made for painful sunburns, so an hour or two on the beach was about all I could tolerate. Another weekend rolled around and the Sharm had lost its charm. We needed something new.

“OK,” Giorgio said, “Where do you guys want to go? We can drive anywhere within a couple hundred kliks!” (‘Klik” was expat jargon for kilometer.)

I immediately pointed to the highest peak east of Yanbu.

I was fascinated by the massive dark barren wall of igneous intrusive stone about 15 to 20 k inland, running parallel to the Red Sea. What could be up there? Had those peaks ever been explored? The explorer in me always wanted to go where no one, or at least, very few, had been before. Giorgio and Doug agreed, but we had to plan for such an ambitious expedition. We gathered supplies: food, cameras, climbing gear, and a tent that week end and headed out in Giorgio’s jeep shortly after daybreak, the next week end.

All our papers: passport, igamma (work permit) and permission to travel in the Al-Madinah Region, in which Yanbu was located, were kept on file in the administrative office of the project.  It didn’t occur to me, or to Doug, as recent arrivals, that we were supposed to request these documents before leaving the immediate vicinity of Yanbu. Giorgio knew this, but he didn’t mention it because he also knew that, if you asked for them, you would be told that you were not allowed to leave the Yanbu Area except for authorized work-related purposes.