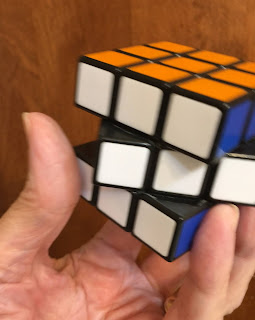 LEARNING SOMETHING NEW
Funny, how your own words come back to haunt you! How many times have I said to students, to adults, and especially to elderly people: “The minute you stop learning, you start dying!” Now, here I am, one of the elderly, myself, if that is determined by the number of years one has lived in this life, and I am learning something new! No, it’s not Alzheimer’s, where everything is new because you’ve forgotten what you heard just ten minutes ago, it’s really something new. Oh, you say, “Haven’t you heard? There’s nothing new under the sun!” Now, that has a ring of truth to it if you have stopped learning, either because you are tired of learning, or because you think you already know it all. No, there is more to reality than just what’s under the sun. That’s the mistake that materialists make. There is a lot to learn beyond the sun. If you are a human being, endowed with a brain and a mind, your potential is infinite, - so, of course there’s always the possibility of something new!

Now, to be sure, there’s a difference between something that is new to me, but that has already been learned by someone else, and something that’s totally new to every living being. The first is definitely possible, because I don’t know everything, and the second is going to be exceedingly rare. Let me give you some examples:

Recently, I learned that love is something that can happen to a human being at any age. Not only that, love is something that takes on an undeniable life of its own, independent of the consciousness, beliefs, and aversions or desires of those in love. True love is not just something between two individuals, it creates its own reality, a reality that transcends the individuals. It is an expanded state of consciousness engulfing them both, a reality that transcends time and space!. If you are infected and overcome by this thing called love, your life is irrevocably changed. Suddenly, life takes on new meaning. Every love song you have ever heard, and some you haven’t, have new, deep meanings that you’ve never heard before!

On the other hand, what I’ve learned about gimmel, the real, but non-physical part of reality, since discovering it more than 10 years ago, is new in the second sense. I find no evidence that anyone, scientist, philosopher, or whatever, has learned of this before, at least not in this historical cycle of time. I cannot discount the possibility that mental virtue, understanding and realization may have been more advanced at some distant time in the past, perhaps even advanced far beyond what we know now. While gimmel sheds light on problems and conundrums that have puzzled scientists and philosophers for hundreds of years, and its existence has been proved using solid empirical data and mathematical logic, mainstream scientists are still not prepared to admit that something non-physical exists. Proof of the existence of gimmel, and demonstrations of how it solves problems untouched by mainstream science have been published in several papers and three books, the latest being Secrets of the Sacred Cube, yet almost no one seems to notice.

So that’s another new thing I’ve learned: No one really wants a new idea, especially if it conflicts with their deep-seated beliefs. It seems scientists are as pig-headed about this as anybody else, maybe even more so, because not only their belief in materialism, but also their life’s work is threatened! So, as Max Planck once said, new science has to wait as science progresses from funeral to funeral! But now, I want to do something else, because I have learned something else, call it a realization, if you want: If, after years of study, you have learned a truth, you must stand up and tell your truth, whether anyone wants to hear it or not. To do otherwise is to be untrue to yourself. Remaining silent after a discovery is the same as denying the discovery.

So here’s another truth: I am an American! My ancestors came here from Europe to escape exactly what governments are trying to do now: to deny you your human rights and freedom; take your hard-earned cash and give it to someone else, - only after they take enough of it for themselves to continue living in the high style provided for them by the very way of life they are working so hard to destroy! As Mark Twain said: “Don’t trust liars and thieves, or congress, but then I repeat myself!”

I will stand up for the freedoms my ancestors fought and died for. If we don’t stand up for liberty and the right to pursue happiness in the way that we see fit, the next generation will not have a chance to enjoy the freedom we have had.

When government assumes the role of God, we are all in very deep trouble. Yes, some government is necessary, but a ruling burocracy is a cancer that soon metastasizes into autocracy. When government denies you the right to pray, worship, work, and be responsible for your own health and happiness, for any reason, they are also denying the existence of God. Just look at any socialist, Marxist, or communist government anywhere, any time. The idea of a Higher Power is not tolerated. And it never works. Such governments always spend far beyond their means, trying to fulfill impossible utopian promises. Sooner or later, such governments fail, because the dependent masses they cultivate to support their agenda eventually outnumber the productive citizens and the whole Ponzi game crumbles, usually after a lot of violence, suffering and dying.

If you are an American, whether your ancestors came here by the land-bridge, on the Mayflower, or on a flight from somewhere a short time ago, don’t let this happen to the Land of the Free and the Home of the Brave. Stand up against any self-appointed elite class that tries to force their beliefs on everyone else, whatever they call themselves. Some form of global government may eventually evolve, but it won’t be socialism, and trying to force globalism to happen through social engineering and government mandates is a sure recipe for disaster. Stand with Patrick Henry, who said: “Give me liberty, or give me death!” Death with dignity is preferable to becoming a pawn in the masses supporting a bloated government of any kind.

The social engineers are prevailing right now by creating unreasonable fear. By inflating the data in some pretty obvious ways, under the guise of being extra careful to stop the spread of a coronavirus, they are trying to condition you to accept unconstitutional government mandates. With enough exaggeration to create widespread fear, they can get away with completely illogical mandates. For example, if masks and social distancing are effective, why did we need to close businesses and deprive people of the right to work, support their family, and carry on normal lives? While vaccines can be effective in some cases, in most cases it’s like closing the barn doors after the horses are already out. Wouldn’t it be better to teach people how to strengthen their immune systems by natural means first, so that injecting poisons into their blood streams wouldn’t be necessary? But, of course, there’s not much money in letting people learn how to take responsibility for their own health.

It is interesting that pseudo-intellectuals are so often the ones pushing socialism, - and our universities are full of them. Don’t they realize that “after the revolution”, they are the ones usually rounded up and shot? Totalitarian governments cannot tolerate people who think for themselves. After the bloom of the utopian dream fades, socialist governments have only two choices: Either adopt some form of capitalism to keep their economy afloat, or be overthrown by angry mobs of people when they realize they’ve been lied to by the governing elite.

You might ask what my agenda is, am I going to tell you who I think you should vote for? No. My agenda is not to tell you what to think, it is to try to get you to think for yourself. You can vote however you want, or not vote at all. That’s part of the freedom our founders gave us. But, if you do plan to vote, do some research, and know who and what you are voting for. Too many Americans have failed to do that for the past sixty years or so. Don’t be persuaded by what politicians promise, be persuaded by what they do or don’t do. Remember what Mark Twain said.

During my career, I have taught mathematics, worked for a government agency, worked for three or four large corporations, and started my own company. In my opinion, government is the most corrupt, least efficient, and most wasteful. With government, less is definitely better.

So now you know where I stand. I am for God, family, science, and country, in that order. But all four are almost equally important. Life without love is not really life, it’s just existence. Religion without science is just wishful thinking, science without spirituality is meaningless, freedom without government is chaos, but government without freedom is tyranny, and voting without knowing what you are voting for is like spitting into the wind.