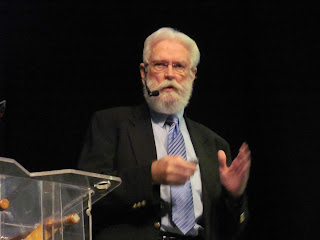 SOME CONCLUSIONS AFTER THE DISCOVERY OF GIMMEL
Based on my life's work and the discoveries published in collaboration with Dr. Vernon Neppe, I conclude that consciousness, represented mathematically by true quantum units of gimmel, shapes the fundamental fabric of objective reality which is continually being transformed into the measurable forms of mass, energy, space, and time, in mathematical accordance with the logical structure specified and represented by the Conveyance Equations. It is the mathematically logical nature of reality that makes both applied and theoretical science possible.

Gimmel represents the transfinite substrate behind which finite mind, operating through the brains and bodies of sentient beings, cannot penetrate. Based on our research, however, I believe that behind gimmel exists Pure Primary Consciousness, the Infinite Intelligence that continually creates, sustains and dissolves all finite forms. As an expression of the intelligent substrate beyond space and time, conveying the intent of Infinite Intelligence, Primary Consciousness is a-temporal: it has always existed and will always exist. This means that there is no absolute beginning or end, only change from one form to another. I believe the universe exists as a projection or reflection of the logical, mathematical multi-dimensional structure of Pure Consciousness, through the self-organizing action of a conscious third form of reality represented by the symbol we call gimmel, existing in every quantum and every atom of the universe.

The discovery of gimmel is nothing more than a bare-bones beginning; the opening of a door to a new, much more comprehensive science, a science that can take us into a new, more detailed understanding of the vast nature of reality. We have developed the basics of a more inclusive calculus, a calculus that has allowed us, for the first time in modern history to take the measure of consciousness and put it squarely into the equations of natural science; but much more needs to be done.

A much more detailed development and application of the Calculus of Dimensional Distinctions awaits the fresh young minds of the scientists of the future. The answers provided by this discovery afford only a glimpse of the broad landscape of the science of the future, a science that, in addition to answering all of our questions about the physical universe, will also boldly go into the greater domain of non-physical reality and explore the infinite possibilities of the human mind and spirit.
Posted by Edward R. Close at 10:06 AM