ABOUT THE BOOK TRANSCENDENTAL PHYSICS 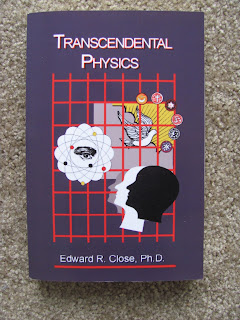 
page 4:
Transcendental Physics proves that a pervasive form of consciousness, (God) not only exists, but necessarily preceded the creation of physical reality."

Pp 59-60:
“With proof that materialism is an incomplete and inadequate theory, science can no longer use it as a basis for understanding reality. Ironically, it is not a thought experiment or theoretical consideration that has brought about the downfall of materialism, it is a meticulous empirical experiment. Scientific materialism has literally been hoisted on its own petard! And the blow is final. The assumption that physical reality exists independent of the conscious observer is simply incorrect. Still, because of ingrained belief in this assumption, the death of materialism is not yet general knowledge.”

In a recent review of Space, Time and Consciousness, an unpublished manuscript by this author, that elaborates on some of the points made in Transcendental Physics, a reviewer said:

“I'd say that your refutation of materialism may constitute one of the biggest philosophical breakthroughs in the last 2500 years… -- a world historic event.”

Page 272: “Once it is understood that reality is much more than matter and energy interacting in time and space, and that this greater reality can be investigated objectively, the doors will be thrown open for science to grow as never before,”

I published several original poems at the beginnings and endings of some of the chapters of Transcendental Physics For example, on page 260, at the beginning of Chapter Ten, you’ll find:

Bathed in diurnal rays both day and night,
We sleep, always blinded by the light.

What’s new is old, what’s old is new,
Once discerned, what’s one is two.

The simple seed becomes a tree,
The atom’s speed, - eternity.

Both time and space
Enshroud the soul,
‘til we embrace

Transcendental Physics is available from Barnes and Noble and other book handlers and on Amazon.com. Anyone who wants an autographed copy, can send a check or money order for US $40.00 (to cover the cost of the book plus handling and shipping) to: