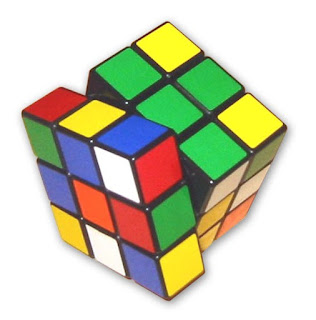 Link to the Power Point used in the second part of the St. Louis presentation Saturday July 22, 2017

KNOW THE CUBE AND SOLVE THE CUBE
The surface of the cube has 54 colored faces: 9 red, 9 orange, 9 blue, 9 green, 9 yellow, and 9 white. This makes 9x6 = 54 total. The cube appears to be divided up into 27 small cubes, but they are attached in the center so that they aren’t able to show all of their faces. If they were all colored on all 6 sides, there would be 27x6 = 162 colored faces, and there would be more possible configurations than all the visible stars in the night sky! Fortunately, they are only colored on 1, 2 or 3 sides.

Fortunately, I didn’t have to work this formula out from scratch. It uses the concepts of combinations and permutations, for which mathematicians, with nothing better to do, have worked out formulae. Determining the number of all possible combinations and permutations is part of a broader mathematical subject known as combinatorics. If this sort of thing interests you, you can look it up on the internet. Carrying out these multiplications and divisions, we get the number of non-redundant configurations to be: N = 43,252,003,274,489,856,000.

This is still a very huge number of different configurations. But take heart! There are algorithms (sequential series of rotations) that reduce the number of necessary rotations to a reasonable number on a path through this maze of possibilities to a solved cube. By “solved”, of course we mean having all nine faces of each color neatly arranged on each of the 6 sides of the cube. Each side is “mono-chromatic”, i.e. all one color.

THE ALGORITHMS
In order to develop algorithms (formulas) for solving the cube, we must have a notation or code for describing all of the rotations needed.

SOLVING THE CUBE
Trying to learn how to solve the cube by reading written instructions alone, is like trying to learn to play a violin by reading. It is possible, but reading is no substitute for a good instructor. I will have more complete instructions and pictures in the book, but just having the algorithms may give you a start. Once you get started, you may even find some algorithms of your own.

Start by holding the scrambled cube with the red center square up. Look for the 4 two-faced edge pieces with one red face, and move them up, one at time, into the top layer with the red face up. Each of the 4 will be in place when its other face (not red) is lined up with its color in the middle layer below it. This will give you a big red “X” that will be your reference frame for the rest of the solution.

Next, find the 4 corner pieces that have one of their 3 colored faces red, and rotate them into place with the red side up and the other two colors matched up with the same color center pieces of the two sides. You will be able to rotate some of these into place without disturbing the red “X”, but when it is necessary to disturb it, you must restore it before going on to the next corner piece. When this is done, you will have completed one layer of the cube. No algorithms are needed to this point. Most people can get this far by trial and error. But it is best to practice doing this until it becomes routine, because the more efficient you become at this routine, the easier the next step will be.

Turn the cube over with the red side down, and proceed to the next step. You only have the 4 edge pieces to worry about in the second layer, because the 4 center pieces are part of your extended “X”. And, only one algorithm is needed to complete the second, or middle layer, but you may think of it as two, because it has a left-hand and right-hand version. Find the edge piece in the third layer that needs to be in the second layer and line one of its colored faces up with the same color center piece. Then use one of the algorithms below to put it into place. Use the right-hand version if the piece being moved into position is facing you, and the left-hand version if the piece is on the left face.

The nice thing about these algorithms is that while moving the correct edge pieces into place in the middle layer, even though pieces in the first layer are moved, they are returned to their correct locations by the time you complete the algorithm. It took me about a week to work these out the first time, and I never wrote them down until recently. They may be confusing at first, but with practice, they become second nature.
Using the right- or left-hand algorithms above from 4 to 8 times should complete the second layer while preserving the first layer. When the first two layers are complete, you are ready to move on to the third, and most difficult layer.

Continue to hold the cube with the red side down. Only three more algorithms (with mirror-image versions) are needed to complete the solving of the cube. But they may have to be used multiple times while watching for specific TRIADIC patterns in the orange faces on the top of the cube. All three are designed to move the faces in the third (top) layer while preserving the two layers already completed. It took me much longer to discover them. The first one is designed to get the top layer arranged for the second one, and the second one is designed to get the top corners in place, and the third one is designed to move the edge pieces of the top layer clockwise or counterclockwise into place to complete the cube.

There are 8 possible patterns for the orange faces in the top layer when the first two layers are complete. Fortunately, you don’t have to know what they are (even though you will get to know them through practicing the algorithms given here). You just need to apply the algorithms below repeatedly, until you obtain a “backwards L” composed of three orange squares in the upper left-hand quadrant of the top face of the cube.
FURU’R’F’
When that orange “backward L” appears, use the “mirror-image” algorithm below:
FRUR’U’F’
Now, check to see if the corner pieces are in place. Don’t worry if they are not turned correctly, just check to see whether the corner piece with, e.g., white, blue and orange faces, can be lined up with the white and blue sides, while the yellow, green and orange corner piece is lined up with the yellow and green sides, the yellow, blue and orange with the yellow and blue sides, and the white, green and orange with the white and green sides. Chances are good that they will not all four line up. Use the algorithm below repeatedly, until they do.

This is the most difficult step by far, and sharp focus, concentration, diligent practice and intuition are needed. With practice, you will intuitively find your way through this step.

If, when you line one corner up, none of the others are in place, use the algorithm above and check again. If two of the corners line up, but the others don’t, line the two that are correct up on your left and perform the algorithm again. Keep performing the algorithm until all four corners are in place. When they are in place, there are 3 possibilities: either 1) the cube is complete; 2) you have a large backward L triadic pattern on the top of the cube with three of the corners having colors other than orange facing up, and one orange face on the left side; or 3) a large backward L with the orange face of the lower left corner piece facing to the front. If you have #2, then, keeping the red side of the cube down, turn the cube to the right, so that the orange face of the corner piece on the lower limb of the backward L is facing you, and perform the following algorithm:
RUR’URU2R
If you have #3, don’t turn the cube, and perform the mirror-image algorithm below:
R’U’RU’R’U’2R’
(Note that the 2 after the U or U’ means perform that quarter-turn rotation twice.)
At this point, you may have a completed cube, or you may have all the orange faces up, but with the edge pieces of the upper layer in the wrong positions. Use the following algorithm to move them clockwise around the top layer, or its mirror-image to move them counterclockwise, until you have a side-wise monochromatic completed cube.
Clockwise: R2UFB’R2F’BUR2; Counterclockwise: R’2U’F’BR’2F’BU’R’2
Congratulations! If you’ve made it successfully through to this stage, you have will have solved the cube. With practice, you will become more and more proficient at avoiding unnecessary rotations, and you may eventually be able to complete the cube from any scramble in less than one minute! HAVE FUN!