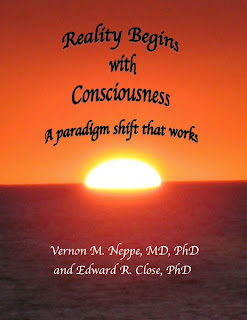 THE PROCESS OF AWAKENING

(This is a continuation of the discussion in the previous post)

For Your physical body, it appears that there is a definite beginning, and an unavoidable end. We call the beginning  birth, the end death, and your life is what happens in between. For you, as a conscious being, these experiences are extremely important. Between the two painfully traumatic events beginning and ending your life, you consciously experience an amazing range of emotions associated with pleasure and pain. The thrill of victory and the agony of defeat are just two examples in the range of impactful emotions that we experience as human beings. During a life, you see only a brief episode - a short excerpt - of an on-going drama, through a tiny window of time in the vast history of sentient beings and the expanding physical universe within the self-referential cosmos. Viewing a life from a purely physical perspective, however, with your birth, life, and death, not much has happened. Nothing is created in the process of birth, and nothing is destroyed when death happens. These events simply mark a pair of life-defining events that, as physical events, are just two different arrangements of a very small amount of matter and energy in the ever-existing vast expanse of reality.

The way in which a relatively small number of elements are first organized as conscious life forms, and then disorganized and dispersed by natural entropic processes over which you have little or no control, makes the difference between your birth, life, and death as events in space and time. From that purely physical point of view, everything that happens during your lifetime, whether it takes a hundred years or a few minutes, is nothing more than a series of minor changes in the geometric structure of a few trillion atoms, with very little effect on the story of reality in general, consisting of the development, cyclic movements, and eventual disruption of solar systems and the formation and dissolution of galaxies over billions of years. But does physics tell the whole story? In a word, NO!

The innate desire of Primary Conscious to expand and contract and experience itself within itself, necessitates the development of mental and physical duality as individual awareness of the distinctions experienced as self and other. To guide the individual conscious being toward the ecstasy of Cosmic Consciousness, pleasurable sensations arise when actions that enhance the development and maintenance of organic life forms that are suitable vehicles for consciousness, are committed, and painful associations arise from actions that will result in injury to, or death of the physical vehicle being developed for expanding individual awareness.

Sometimes, you may have the illusion of being in complete control of your life, but the amount of free-will you actually have is very limited. Do you remember deciding to be born? Can you choose not to die? By flapping your arms can you fly? By thinking in some focused manner, can you affect physical changes in your body?  Most of us, at this point in planetary time, barely out of the darkest of times, called the Kali Yuga (the dark age of mechanistic thinking) by the Ancient Wisemen, have no memory or foreknowledge of anything before birth or after death, and a very limited ability to change anything in between. And yet, there are some among us who, because they have a lot of money and some power over others, try to change the purpose and destination of the human species. In effect, they want to play God, without even beginning to be qualified.

This morning I had a fleeting memory of someone in the year 1317. He specifically pointed out the date, so I wouldn’t forget it upon waking. I’ve had such memories before. Most of them occurred during or after sleep or meditation. they seemed to be from the consciousness of someone in the past. Are these memories real glimpses of the actual past? Distant viewing in spacetime? Time travel? Evidence of reincarnation? Or imaginations caused by the random firing of synapses in a half-awake, half-asleep brain? - These are not trivial questions! For me, and I think for many others, they have to be asked.

Because I have had such memories throughout my entire life, I have thought about these questions a lot, and I have arrived at a number of conclusions. My conclusions are supported by logic and empirical evidence, validated in several instances by experiences and observations of other people, but I cannot include all of the arguments and evidence in this short blogpost. I can only summarize here; but I have provided the details in six published books, three additional books, one in press, two in colleague review, and in a number of published technical papers. Most of the information can be found among the 500 plus posts in the archives of this blogsite.

Basically, I have concluded that Consciousness is Primary, and the purpose of the physical universe is to provide a way for Consciousness to experience itself. Consciousness cannot be adequately assessed by the finite mind because it has no beginning or end, and the forms through which it expresses itself are constantly changing in accordance with the logical structure of Consciousness itself, progressing from simple to complex geometric patterns, to rudimentary awareness, through a spectrum of increasing awareness, to the full awareness of Cosmic Consciousness. While the progress of mental virtue and spiritual awareness, on average, proceeds at the slow pace of planetary time, individual conscious beings may forge ahead, go with the flow, or lag behind. Clearly, we should seek to forge ahead, and the best way  to do that here and now, is to seek the company of those who have attained Cosmic Consciousness.

A moment of Divine inspiration is worth many years of intellectual cogitation. Learning facts and knowing reality are not the same thing. There are vast differences between data, information, knowledge, understanding, actualization, manifestation, and realization. Consequently, at this point in planetary time, Realized Masters are very few and far between. Most of us labor in some form of unconsciousness or subconscious sleep. Those Awakened Ones, fully aware in the illumination of Cosmic Consciousness, are the way-showers, the embodiment of the Truth and the Light.