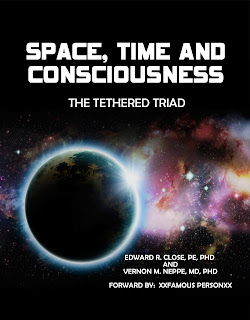 THE GREAT ILLUSION & THE GRAND REALITY

There are two extreme views of reality. This is not just the case for people who call themselves scientists, it is also true for all consciousness beings: One of the extreme views is called Determinism, the other is called Probabilism, and, of course, there are many views that fall in between, and views that are mixtures of the two extremes. Every conscious being has a view that falls somewhere on that imaginary line between the two extremes, and the appropriate question becomes: Is there a ‘correct’ view; a view that corresponds with the reality that actually exists? The determinist says yes, the probabilist says no.

The determinist believes that reality is a logical system that exists objectively and changes over time according to natural laws that, while they may be very complex, can be discovered and understood. The probabilist believes that reality is ultimately a system of random processes, within which natural probability distributions occur that favor certain outcomes, and that even the outcomes that have become regarded as ‘laws of nature’, like F = ma and E = mc2, are only approximately correct at any given point in time. Determinists tend to believe in the existence of an intelligence behind everything, while Probabilists tend to be agnostic or even atheistic.

It turns out that they are both wrong - or, more accurately, as relativity and quantum physics have shown, and now, new discoveries in the expanded paradigm that we (Neppe & Close) call TVDP have verified, they are both right and wrong, and therefore, neither, reflecting the logic of a reality of more than four dimensions. The dichotomy between Determinism and Probabilism, a split that leads to endless debate, is much like the division between Biden Democrats and Trump Republicans in America today, and between the Globalists and Nationalists worldwide, in that they are just the dramatic warp and woof of distraction by belief, designed to obscure the true nature of reality. The majesty and elegance of reality is hidden by misunderstandings presently common among human beings about the real nature and interaction of matter, energy, space, time, and consciousness.

Max Planck exposed some of the basic illusions that human beings have about the nature of matter and energy, Albert Einstein uncovered some of the basic illusions we have about the nature of space and time, and together, they dispelled the illusion that these four basic variables of physicality form a fixed universal background in which all things exist, and all events happen. With their surprising discoveries, mass, energy, space, and time, the basic measurable aspects of physical reality that had been the four solid corner posts of classical scientific materialism for many years, were shown to be interacting parts of an ever-changing holistic reality, whose measured values expand and contract from one observer to another, depending upon secondary and tertiary conditions like velocity and acceleration. With the discovery and study of gimmel, the quantifiable impact of a primary form of consciousness (See the list of relevant publications at the end of my post  on Extra-Physical Reality, posted on this blogsite September 18, 2022), further illusions are revealed.

A Matter of Life and Death

A dear friend, uniquely well-trained in both science and theology, after reading my third book, Transcendental Physics, and after someone he loved very much died, had two questions:

1)      Is there a reality independent of what we think about it?

These important questions are examples of the type of questions that Gödel’s incompleteness theorems prove may exist in any consistent logical system. They simply cannot be answered in terms of the system within which they are asked. The proof of  Gödel’s theorems was, according to professional mathematicians of the time, “so novel that only those intimately conversant with the technical literature of a highly specialized field [the symbolic logic of set theory] could follow the argument…”. With the risk of appearing to be ‘beating a dead horse’ again, I must remark that the calculus of dimensional distinctions (CoDD), the geometric-mathematical system that I have talked about so often in these posts, makes proof of the incompleteness of finite logical systems so simple as to be almost trivial.

The drama of conflicting opposites is easy enough to get caught up in, because it provides some relief from the boredom typical of those who have not yet learned to think beyond the obvious. When I first started teaching mathematics, in a secondary school in the US public school system in Mid America sixty years ago, it was not at all uncommon to hear teenagers arguing about something, calling each other “ignernt”. (Yes, that’s the way they pronounced the word ignorant). Once, upon entering a classroom where such an argument was in progress, - I think it was on my first day of teaching - I took the situation as an opportunity to teach. I pointed out that there is nothing wrong with being ignorant. In fact, everyone is ignorant of something. For example, I told them, I knew nothing about brain surgery. The punchline was: “There is a remedy for ignorance. It’s called education”. I’d like to think that I prevented some unnecessary violence, maybe a black eye or some pulled hair. I enjoyed teaching mathematics. It was very rewarding to see young minds begin to think at least a little beyond the obvious, and I learned that most people, even in college and university, have no idea what mathematics is, what critical thinking is, or what constitutes proof of a scientific or mathematical hypothesis.

What does this have to do with the greater illusions of life and ultimate reality? Conflict is universal, and conflict of opposites can lead to violence and, on a large scale, to group psychosis, and possibly to another world war, with the needless injury and death of billions of the souls now occupying physical bodies. Our leaders today are acting much like those teenagers, unaware of the potential results of their aggressive defense of their own ignorance and the desire to punish the perceived ignorance of others. We’ve been down this road many times before since the descending ages of the last peak of mental and spiritual virtue more than 10,000 years ago. Adding to the danger this time, are the false idols of artificial intelligence and the irrational belief that anyone can “reimagine” reality, past, present, and future, and by doing so, remake reality in their own imperfect image. We live in dangerous times. Our survival as a viable species on this planet depends upon understanding the difference between illusion and reality.

The Significance of TDVP and the Discovery of Gimmel

The Triadic Dimensional Vortical Paradigm (TDVP) is a meaningful expansion of the current scientific paradigm, expanded to include consciousness as a quantifiable variable in a 9-D geometric mathematical model of reality. The discovery by Neppe and Close while applying the quantum calculus of the TVPD, the calculus of dimensional distinctions (the CoDD), that no stable physical universe could exist without the third form of reality beyond mass and energy, a form with no mass or energy of its own, that we chose to call gimmel, has changed everything. Not only can we explain things that mainstream science cannot explain and consequently has to accepted as “weird”, but we can also answer questions that materialistic science will not even ask, and we can distinguish existing reality from conceptual fantasy using the TRUE analysis of the primary quantum calculus (the CoDD) of the TDVP.

With the knowledge and experience gained from application of the new science of TDVP to numerous experimental and conceptual investigations, how will I answer the questions my dear friend asked? Let me address them one at a time. The first one was: Is there a reality independent of what we think about it? In the current mainstream  scientific paradigm, the answer is an unequivocal yes, because current science and technology are built on the very assumption of the complete independence of objective reality from the state of consciousness of the observer. My answer at this time is also yes, but it is a qualified yes, because the extent to which it is true depends on the level of consciousness of the “we” in the question he asked. At this point in the relative time cycles on this planet, reality is mostly governed by the Primary form of Consciousness, independent of the functioning of the sparks of self-consciousness identified with localized physical life forms, but in the future, this will change due to the gradual increase in mental and spiritual virtue among conscious beings living on this planet.

The second question my friend asked was: Where did she (his loved one who died) go? The answer is: She didn’t go anywhere; at least not in the sense meant in the context of physical reality. Even her physical body did not go anywhere when she died, it just began to disintegrate because the billions of TRUE (quantum equivalence units) that kept it organized and functioning in a way that kept it alive, were no longer able to perform the necessary organizing and maintenance processes to do so, due to the effects of irreparable damage or disease. Where did the organizing gimmel units go? Like the physical components of her body, the meaningful components of her soul still exist in an expanded domain of our multi-dimensional reality, because the law of conservation of mass and energy is operative for all of reality. Nothing is ever created or destroyed by natural or man-made processes, it only changes form.

What is the solution to the currently mushrooming of real, potentially disastrous problems created by those who, through ignorance, are trying to play the roles of petty gods, with no concern for the collateral damage of widespread pain, suffering, and loss of human lives? A combination of real education and enlightenment of the electorate is the answer. But it must be education about the actual facts that exist, not of the half-baked ideas someone wants to reimagine about the past, present and/or future, and it must be the spiritual enlightenment of expanding individual consciousness, guided, if necessary, by those few rare individuals who have reunited with the Presence of Primary Consciousness. The discovery of gimmel leads directly to proof of the existence of enlightened beings and the existence of the Primary form of Consciousness that creates, maintains, and evolves the stable structure of physical reality and organic life forms supporting the spiritual evolutional of our eternal souls toward the ultimate goal of Cosmic Consciousness.

The great illusion is the splitting of reality into opposing extremes to keep the conflicts going to benefit the wealth and power of those who want to play God. This dangerous game is promoted by Earth-dwelling ego-based psychopaths in the same evil spirit of the despots and tyrants in the list of evil rulers in the recent history of the human race, as we moved past the lowest point in mental and spiritual virtue in this planetary time cycle in 499 AD.  The Grand Reality is the magnificence and elegance of the Infinite Intelligence hidden in plain sight that connects and unites us through the self-less Love and the creative energy of Primary Consciousness.