NEW APPROACH PART 23: NO SUCH THING AS NOTHING 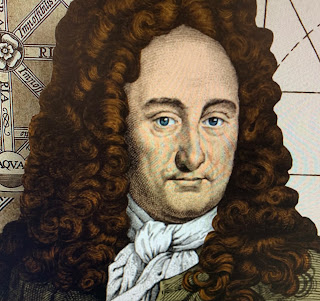 The Answer Without a Question

THERE IS NO SUCH THING AS NOTHING

Low clouds were roiling overhead, and everything was wet, but the rain had stopped when the coach pulled up. The horse nearest me shook itself as the driver stowed his whip in the tubular scabbard beside his seat. Stepping down, he opened the door to the coach. The man inside was a rather ordinary looking man, about twice my age. - I think I was about thirty, and he was about sixty. -  No one would guess that he was world-famous, I thought. He called my name with a question mark at the end, and his crisp Hochdeutsch, with a local Eastphalian undertone put me at ease. “Ja, das bin ich!” I answered, and he gestured to the seat opposite him, and as I climbed in, I noticed that he was seated in a curious little square, upholstered swing seat hanging from springs on sturdy hooks, and it was also mounted on springs below. Shock-absorbers, I surmised. As the coach began to move on, he explained: “I write while I travel, and this keeps the hand and writing pad more coordinated!”

“Newton’s laws of motion.” I commented.

We hadn’t met before, but we had been writing back and forth for some months, discussing mathematics, natural science, philosophy, and other subjects of mutual interest, and we had found that our views were generally compatible. A recommendation from Herr Gottfried Wilhelm von Leibniz would go a long way toward getting me the teaching position I was seeking at the university in Giessen. Leibniz was traveling between Leipzig and Hanover, which made it convenient for us to meet, as I was in Halle on business. After a few kilometers, we stopped at a roadhouse for refreshment.

What I remember most about this trip was the strange reaction of the local folk when they asked who these strangers were descending into their midst, and my traveling companion answered with his name. A ripple of raised eyebrows and muffled laughter passed around the room. I think I even heard more than one tongue in cheek: “Ja, doch!” (yeah, sure!). They simply didn’t believe him! “How rude!” I thought. Leibniz was more famous across Germany at that time than even Frederick, the Hohenzollern King of Prussia! But he held his hand up and said “Ja, ich gestehe. Ich heise Wille Schmidt!” (I confess. My name is Willy Schmidt!) They all laughed aloud and turned back to their bier and bratwurst.

I realized that they expected Gottfried Wilhelm von Leibniz to be larger than life, and so impressive that anyone would step aside to allow him to pass. At public appearances and for portraits, Herr Leibniz always dressed like royalty and wore a majestic wig, while this ordinary looking little man in traveling clothes was quite unimpressive - and bald! I imagined he had experienced this kind of reception before, and of course, he had no need to prove his identity to anyone here!

This memory is typical of a past-life memory for me: just a little snippet, like a trailer from a movie, with definite audio-visual detail and the emotional content of a shocking, embarrassing, or surprising event. I never seem to know what year these memories come from, but that’s no different than memories from earlier in this life. After this memory surfaced and was verified, I was able to determine that it probably occurred around 1706 or 1707. I knew that my name then was Johann but determined only after the verification that I was Johann Georg Liebknecht. My interests then were almost identical to my interests now: The mathematics of Pierre de Fermat, science, linguistics, geology, fossils, stone-age artifacts, spirituality, music, natural medicine, and longevity. I had a family to support, and I needed that teaching position.

I have written about memories like this that appear to come from at least six or seven other past lives, and there are probably many more. I almost feel that I can say, like Mark Twain, that I have been reborn more times than anyone except Krishna! But the normally hidden nature of reincarnation is not the focus of this post, I want to talk about other things hidden in plain sight.

Austrian-born Ludwig Josef Johann Wittgenstein, considered by some to be the greatest philosopher of the 20th century, said:

“Whereof one cannot speak, thereof one must be silent.”

That sounds pretty profound, but it has been my experience that philosophers are some of the most verbal people alive. They never remain silent for very long about anything, even something “whereof one cannot speak”!

Mathematicians certainly aren’t silent either. In 1987, mathematician John Stewart Bell published an interesting little book with the intriguing title:  Speakable and Unspeakable in Quantum Mechanics: collected papers on quantum philosophy. In this book, Bell summarized the famous EPR paradox paper, and the public debate between Einstein and Bohr over the nature of reality. The Einstein Podolsky Rosen (EPR) paper used a symmetric sub-atomic reaction to try to make the point that the Heisenberg uncertainty principle was violated in this specific case, but the debate was really over whether science is deterministic or probabilistic. Is nature governed by cause-and-effect laws, or by statistical probabilities? Is reality logically ordered and governed by exact, discoverable mathematical formulas, or basically chaotic with occasional stabilities that only show up in statistical analyses? I had some good debates on this subject with my boss and friend, Dr. Nicholas C. Matalas, Harvard PhD probabilist and Director of the US Department of Interior Systems Analysis Group, of which I was one of the seven charter members. Even though we argued passionately about determinism vs probabilism, we always remained good friends. We just agreed to disagree. It is worth noting that Bell, who I think was originally sympathetic with the point of view famously expressed by Einstein when he said: “God doesn’t play dice”, was the one whose work ended up favoring Bohr.

In 1964, Bell derived what has been called “Bell’s Theorem” an argument designed to determine from experimental data who was right, Einstein or Bohr; but it was not actually a mathematical theorem. It was a probabilistic inequality that, when applied in experiments designed for that purpose in1982, upheld Bohr’s side of the EPR paradox debate. Because of this, many considered the matter closed. But one unspeakable thing that must be said, is that the violation of Bell’s inequality by the statistical analysis of experimental data does not settle the measurement problem or eliminate the possibility of hidden variables.

Both problems were finally resolved only recently by the discovery of gimmel, the measurable non-physical part of reality. It turns out that the measurement problem was both caused by and hidden by the improper use of a calculus designed for application to continuous functions that is therefore unsuited for the analysis of quantized phenomena. A quantum calculus based on the smallest stable quanta, i.e., the mass and volume of the free electron as the true quantum equivalence unit, was needed. I introduced such a calculus in 1997 in my third book, Transcendental Physics, and I joined forces with Dr. Vernon Neppe in 2008 to develop it further. We called the quantum equivalence unit the Triadic Rotational Unit of equivalence (TRUE) and used it as the basic unit of measurement for the Calculus of Dimensional Distinctions (CoDD).

Matter, Energy, Space, Time, and Nothing?

These four things: matter, energy, space, and time, are the primary measurable features of reality. All things appear to be made up of solid matter, to occupy space, and to interact energetically over time. And these four basic aspects of reality can be observed and measured by anyone. But, after the discoveries of relativity, quantum physics, and non-physical gimmel, mathematical physics, the most objective, no-nonsense science, tells us that things are not what they seem. As we look more and more closely, we see that matter is not solid, mass and energy are just two of the three forms of the essence of reality, and space and time have no independent existence of their own.

Applying the CoDD of the Triadic Dimensional Vortical Paradigm (TDVP) has revealed the hidden existence of a measurable third form of reality, that in union with mass and energy, makes up all of the stable structures of the physical universe. This third form of reality, which we call gimmel, although measurable in the same quantum units as mass and energy, cannot be mass or energy. It is, therefore, non-physical. Further analysis of this non-physical subatomic something reveals that it is nothing other than the manifestation of Primary Consciousness at the subatomic level organizing, expanding, and re-absorbing mass, energy, and consciousness. In other words, gimmel facilitates the process of physical reincarnation on the quantum scale.

Further inquiry reveals the real meaning, purpose, and logical intent of the existence of reality: The physical universe exists solely for the purpose of providing a venue for the spiritual evolution of individual consciousness in union with organic lifeforms. Every sentient being alive experiences consciousness through the stable structures of mass, energy, and gimmel.

I found myself in that familiar brightly lit room again; the room with white marble walls and floor, shelves filled with books, and a feeling of anticipation. It was very familiar. I was on the Threshold, a place of conscious transition. I remembered being here just before my life as Edward Roy Close began (See the first blogpost of this series: Threshold, 12/24/2021) when I was told: “This is the Threshold. A place where the past, present, and future are all present, … on the Edge of Infinity.”.

The end of the room was open, and far below was the world of human beings with its history recorded in the layers of the Earth’s crust, from the solidified lava of the pre-Cambrian to the buried Neolithic of the present. Two questions immediately came to mind: What was before the pre-Cambrian? And what lay at the opposite end of this room? As soon as the questions formed in my mind as specific thoughts, I knew the answers. It was an instantaneous fulfillment of the promise: “Ask, and it shall be given you; seek, and ye shall find; knock, and it shall be opened unto you.” - Matthew 7:7

My questions were about two separate locations in spacetime. The answers came from an expanded view of reality that exposed the three-dimensional nature of time that was hidden in plain sight. Just beyond the doors to this room lay my real home; but I could not go there just yet. In Earth’s planetary spacetime, before pre-Cambrian time, and after the slowly moving present, there are endless cycles of time, spiraling backward and forward, providing endless venues for the spiritual evolution of individual conscious entities, existing as finite quantized manifestations of consciousness in an infinitely continuous reality.

After returning from this experience, I finally understood the paradoxical conclusion that I arrived at in 1989 through the application of the CoDD to the red-shift big-bang expanding universe hypothesis: There was no big bang because there is no such thing as nothing, there never was, and never will be. That means that there is an answer for which no question is sufficient: Reality exists because is always has, and always will, due to the conservation of the essence of reality, including consciousness.

In the next post, I will explain where mainstream science went wrong, and how what we know about the planet Earth, actually validates the TDVP conclusion that we exist in a no-big-bang infinitely recycling universe.