INTRO TO THE CALCULUS OF DISTINCTIONS

Here are the Initial Equations of the calculus:

The symbol indicating a distinction (upside-down L) represents a distinction of any kind. The blank on the right-hand side of equation 2.) denotes no distinction.

In this introduction to the application of the CoDD to real problems, we start with a list of logical expressions in symbolic logic and CoDD notation, with calculated values in the table below. 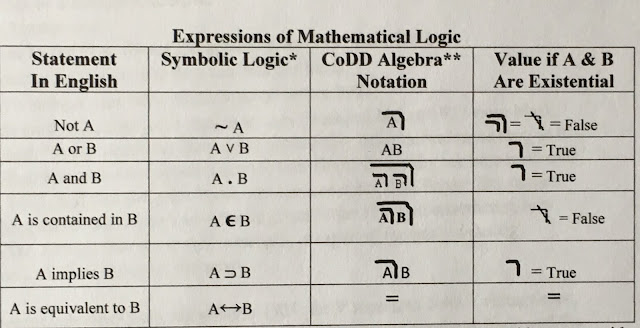 *Note: The same logic symbols used by G. Spencer Brown in Laws of Form are used here to avoid confusion when the reader refers to Brown’s work. **A and B in this table represent algebraic variables or functions that may take on any value allowed in the CoDD.

CoDD expressions often involve nested symbols up to seven to nine levels deep, or more, conveying the geometric structure of the calculus and of existential reality. Three-dimensional representations would be more realistic, and three-dimensional representations can be developed for use in videos or slide presentations, but distinctions of four or more dimensions can only be represented by projections onto two-dimensional media, and are generally incomprehensible to anyone who has not spent a lot of time studying them. Two-dimensional nested expressions are used because they are relatively easily drawn on sheets of paper or a blackboard.

A Demonstration of Calculation:


Assume that a hypothesis about some aspect the reality we experience can be expressed in terms of the CoDD by the expression H consisting of existential distinctions:

These calculations reveal that H is equal to a non-distinction. Therefore, the hypothesis represented by expression H is false.

Application of the CoDD to a Simple Example:

Those familiar with automotive history know that most cars produced before 1927 were black. Henry Ford famously said: “A customer can have a car painted any color he wants, as long as it’s black!” And everyone familiar with cars knows that the Ford Motor Company has also produced many black cars since 1927, and that there are black antique cars other than Fords. But suppose you didn’t know anything about cars other than what is given in the first two statements; how would you proceed? Even though this is a simple example, comparing the analysis using symbolic logic with the CoDD analysis is instructive.

Let the symbol P represent cars manufactured prior to 1927; let V represent John’s vintage cars; and let B represent black cars. Translating the statements from English to symbolic logic and the CoDD, we have:

Looking at the symbolic logic approach first, we see that the first two statements are given as true, and their truth in conjunction has the following logical consequence:

Now, let’s look at the CoDD analysis. We start with the CoDD representation of statement #3 as our hypothesis: The groups of vehicles that P, B and V represent are existential. Therefore, they can be replaced by symbols of distinction, and we have:

This calculation is performed by applying initial equation #2 three times in the first step, three times in the second step, and once in the last step. Since this CoDD expression of statement #3 reduces to, and is therefore equivalent to non-distinction, the statement is false. Statement #1 and #2 taken together, do not imply statement #3.

The CoDD is a powerful tool because it allows one to check the logical validity of statements and hypotheses of any kind very quickly once it is translated into the CoDD notation. With practice, it is much more direct and easier than conventional symbolic logic. The simplification steps for even a very complex CoDD expression can be done visually.