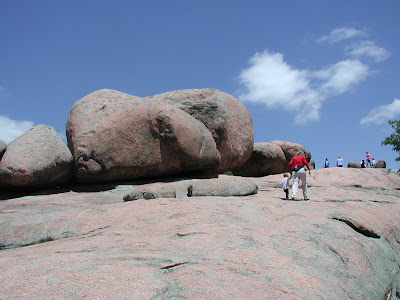 We've been working on redefiniing some of the terms in our glossary that are very significant relative to our reality paradigm (TDVP). There were even some words very important to TDVP that had not been defined in the glossary at all. One such word was ‘existence’. Dictionary definitions of existence run something like: “Existence - that which exists” and “a state of existing or being”. From a scientific point of view, these are not definitions at all. They reference a form of the same word they are trying to define. Does this really shed any light on the meaning of the word? Obviously not.

OK, here’s a common-sense definition that seems to be a bit more meaningful: “A thing exists if it persists with or without the presence of a conscious observer.” This seems to fit our everyday experience. For example, a big granite boulder that I played on as a child has persisted where it stood in the 1930’s until this day. Surely this proves that it exists. And, if geologists are right, it has persisted for a very long time. This particular boulder is part of a Pre-Cambrian igneous intrusion in the Saint Francois Mountains that weathered into the form it has now long before Columbus sailed. It probably looked much the same as it does now even before the Pyramids were built. Yes, this granite boulder exfoliated from a pre-Cambrian megalith surely seems to exist by this definition of the word.

Clearly this common-sense definition is better than the first two, but does it fill the bill for TDVP? After careful examination, I’m not sure this definition is sufficient either. It involves two additional words which may be even more difficult to define: ‘conscious’ and ‘persists’. The first implies the existence of something called consciousness and the second implies the passage of time. Ignoring the difficulties of defining consciousness and time for the moment, let’s see how this definition might work with regard to my old friend the granite boulder.

Can we determine whether the boulder really satisfies the requirements of this definition? We have to ask: was there any time during the persistence of this boulder when there was no conscious observer? I certainly wasn’t there all that time. But, is a fox, rabbit or hawk not a conscious observer? Is Primary Consciousness a conscious observer? If there actually ever was a time when there was no conscious observer, how could we know whether the boulder existed or not? Of course, it doesn’t seem reasonable that a mega-ton granite boulder, emerging over eons by natural weathering from a megalith of cooled magma, would disappear when no one was looking, but that’s exactly what elementary particles do in quantum physics experiments, and that boulder, and everything else, is made of elementary particles.

Considering this definition of existence involving persistence, with regard to elementary particles, we must ask: How long constitutes enough persistence to say something exists? It would seem that by this definition, to exist, something must persist long enough to register in human consciousness. This might mean that only fermions, the elementary particles that make up ordinary stable matter, actually exist. The other particles of the so-called ‘particle zoo’ don’t persist long enough to register in human consciousness. We can’t actually see them, we only see evidence that they were there, a significant length of time after they were gone. Is their ephemeral existence, or even their potential existence part of the necessary and sufficient conditions for ordinary matter to exist? This definition seems to raise more questions than it answers.

Quantum physics experiments prove that elementary phenomena do not exist as particles or waves until they are observed. The exquisitely detailed Aspect experiment and the delayed-choice experiment, endlessly refined and repeated over many years, proves that this is true. If our understanding of quantum behavior is correct, and most of the electronic devices we depend upon every day would not work if it were not, the mainstream view of matter, energy, space-time, and consciousness is, at best, incomplete, and almost certainly wrong in some respects. TDVP solves this problem by proving that consciousness, matter and energy are all three necessary co-existent parts of reality. See http://www.erclosetphysics.com/2016/02/the-simple-math-of-true-units-continued.html

If, like scientific materialists, you want to cling to the belief that reality consists of and can be explained by nothing more than matter and energy interacting in space and time, then the ‘existence’ of elementary particles and conscious entities is a real problem. How can observation have anything to do with the existence or non-existence of real objects? Yet this is what experiments dealing with elementary particles keep telling us. This is why mainstream scientists, especially physicists, keep saying “quantum physics is weird”. Could it be that quantum phenomena are not actually weird, but that science just needs a new definition of existence?

The definition under consideration: “A thing exists if it persists with or without the presence of a conscious observer” seems to work for everyday macro-scale objects, but does not work at all for quantum-scale objects. Does this suggest that physicists are correct who say there are two different sets of ‘laws of physics’, one set for quantum phenomena, and one for everything else? No, I don’t think so. There is only one reality, not one for us to experience and one for elementary particles to experience. When consciousness is included in TRUE analysis as shown in the paper linked above, quantum, relativistic and macro-scale phenomena are logically and mathematically integrated. If this is true, then I should be able to find a definition of existence that works for TDVP and for the everyday world of our experience.

A real definition of existence must work for elementary particles and for the everyday objects we experience as well. Even if I conclude that my boulder definitely exists, what about the elementary particles of which it is made? The elementary particles that make up the elements in the stone are in constant motion, -- especially the electrons. Are the elementary particles that make up the atoms and molecules of orthoclase and plagioclase feldspar, quartzite and hornblende in this big rock the exact same elementary particles that made them up all those years ago? Not very likely. Do they somehow appear and disappear like actors taking a break when no one is looking, with understudies standing in when they have to leave? Apparently it is something like this, because somehow, in composite they still comprise a granite boulder that looks very much the same as it did many years ago. Clearly, we need a better non-tautological definition for existence that works for all objects, big and small.
TDVP is a nine-dimensional model of reality containing multiple combinations of measurable distinctions of three forms of reality. Based on findings obtained by applying the mathematics and logic of TDVP, a new definition of existence is needed.

Because of the limitations of our physical senses, an object may appear to have less than nine dimensions, and may appear to consist of only one or two forms of reality. If this is not just an appearance, the object will not be stable enough to form a persistent structure. Examples of this are the non-fermion members of the “particle zoo”. The ephemeral appearances of such particles are fleeting glimpses of a fractured reality. Their substance contributes to reality only when re-absorbed into stable sub-atomic structures. It is only in this sense that they are real and can be said to exist. In the case of real existential objects, the apparent lack of some dimensions or forms is a perceptual illusion caused by the limitations of our senses.

This definition is as simple and complete as a definition of existence can be, consistent with everything that has been known, and what we have found with TDVP about reality. Now, because it implies that for an object to exist, it must have extra dimensions beyond the four of contemporary science and contain mass, energy and consciousness, it is very different from the current scientific understanding of existence. This is consistent with the findings of TDVP that the three forms of reality are inseparable, but I suspect that at this point, a little more explanation may be in order.

The mathematics showing this are beyond the scope of this post, but the concepts are not excessively difficult. Only three basic concepts are needed:

These three concepts work together to define existence in the following way: The distinctions of reality are quantized and integrated dimensionometrically.

In Primary Consciousness, all possible distinctions are related by mathematical logic. Individualized finite consciousness, i.e. sentient entities like us, deal with reality in terms of a specific set of finite distinctions. In the physical universe, finite distinctions occur in multiples of the smallest possible units, called quanta. Basic number theory and the Calculus of Dimensional Distinctions applied to the mathematics of Euclid, Fermat and Minkowski, reveals an existential reality of nine spinning embedded dimensions and three intimately related forms.

All of these existential things are multiples of triadic rotational units of equivalence (TRUE), the basic quantum distinctions of the Calculus of Dimensional Distinctions. Their stable combinations are governed by Fermat’s Diophantine (integer) equations. I call them Conveyance Equations because they convey the mathematical logic of infinity from Primary Consciousness into the finite physical universe.

Finally, time and consciousness, like matter and energy, are quantized in the physical universe, and integrated with space by the natural extension of Minkowski’s four-dimensional space-time, to the nine-dimensional domain of space-time-consciousness. Even though the direct experience of reality for human beings is limited through our physical senses to five dimensions, i.e. three dimensions of space, one quantum of a time dimension, and one quantum of consciousness, mathematically, time and consciousness are, like space, three-dimensional. While this is hard to visualize because we are only accustomed to visualizing what we experience through our limited physical senses, it is quite manageable mathematically. Reality is only fully describable in terms of three forms spinning in nine-dimensions.

Because of the limitations of our physical senses, an object may appear to have less than nine dimensions, and may appear to consist of only one or two forms of reality. In cases where this is not just an appearance, the object will not be stable enough to form a persistent structure. Examples of this are the non-fermion members of the “particle zoo”. The ephemeral appearances of such particles are fleeting glimpses of a fractured reality. Their substance contributes to reality only when re-absorbed into stable sub-atomic structures. It is only in this sense that they are real and can be said to exist. In the case of real existential objects, the apparent lack of some dimensions or forms is a perceptual illusion caused by the limitations of our senses.