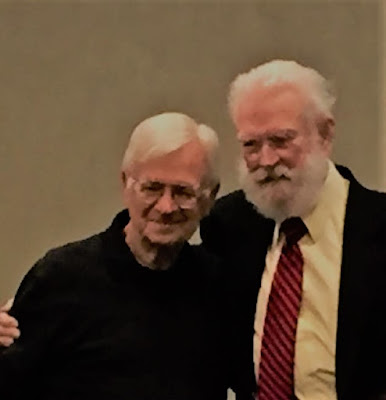 I am honored to be able to say a few words here today about my long-time great friend, Dr David Stewart. It was hard for me to decide what to say to this gathering of David’s family and friends, in the 15 or 20 minutes that I have, not because I don’t have much to say, but because I could talk for a couple of hours about him and only scratch the surface. So my problem is how to convey to you what a great man David was, and is, in such a short time.

I think that probably just about everyone here knows that David Stewart was a great teacher and writer of books, a great family man and friend, an outstanding scholar, and above all, a devout Christian of deep faith. Let me underscore the fact that he was a man of God by letting him speak for himself. In the introduction to his excellent book about the chemistry of healing organic compounds, sub-titled “God’s Love Manifest in Molecules”, he quotes Psalm 19: “The heavens are telling the glory of God; and the firmament proclaims his handiwork.” David goes on to say: “The psalmist speaks of the power and nature of God as evidenced in the grandeur of the galaxies, the great dome of the sky, and the infinite scale of the cosmos. … even though inanimate creation does not speak in words, it still has a voice resounding everywhere, to be heard and understood by the spiritually attuned… the atoms are also telling of the glory of God; and the molecules proclaim his handiwork.”

These statements provide us with a look into the mind of Dr. David Stewart. Having talked with him on many occasions over the years about God and science, I know that he saw science and spirituality as complementary paths to Truth. He saw no conflict between science and religion. I suspect that this is something that most of you already know about David, but now, let me see if I can tell you a few things about him that you might not know:

I first met David when we were assigned to rooms directly across the hall from each other on the second floor of McMurray Hall, the freshman men’s dormitory on the campus of Central Methodist College, now Central Methodist University. He was a Philosophy-English major, planning to become a Methodist Minister. I was a Physics-Math major, planning to become a theoretical physicist. Classes for our major and minor interests were held on opposite ends of the campus. But David had an abiding interest in science and mathematics, and I had an abiding interest in philosophy and religion.

We did have one class together that year. As honor students, we didn’t have to take first-year English and math courses, and instead were allowed to enroll in more interesting courses like a creative writing course taught by one of the most popular professors on campus, Dr. Thomas Perry. We came to know each other in this class, and in after-hours small groups of students that tended to congregate in our rooms, and In late night discussions, common in college dorms in those days, we discovered that we both believed there should be no conflict between real science and real religion, and we soon became good friends. That was 1955. 65 years later, we are still best friends. I was fortunate to get to know Dave’s family. His father, who taught English to Penitentiary Inmates, had a delightful sense of humor. And Dave’s brother Ted said that Dave and I were twins. We just happened to be born to different mothers!

Dave and I thought so much alike that it was a little spooky at times. During those late-night discussions, we would sometimes say whole statements in unison, and often finished each other’s sentences. We both had numerous experiences of sitting in class, suddenly thinking of the other, just before looking out the window to see the other walking by on his way across campus. We seemed to have some sort of psychic connection. Partly because of this, we became interested in the then-new science of parapsychology. We carried out some very interesting experiments with the support of a physics professor and Dr. perry. We corresponded with Dr. JB Rhine of Duke University, the pioneer of parapsychology in the US at that time. He encouraged us to continue our parapsychological experiments, but wisely advised us to get a solid education in some other field, as there was little demand for parapsychologists!

Students were allowed to choose roommates after the first year at Central Methodist, so because of our common interests and our budding friendship, we chose to be roommates our second year, and again until the middle of our third year. One night in the second semester of our Junior year, in a discussion about life and the reason for existence, we agreed that we were not getting the answers we were looking for in the classrooms of Academia, so the next morning, we packed up and left.

After camping in a cave for three weeks, we struck out hitch-hiking across America to California. Our goal was to meet certain famous people who we thought might have some answers. That was the beginning of Dave and Ed’s Excellent Adventure!

We were honor students, so our parents and some of the administrators at Central Methodist nearly had heart attacks. I won’t go into details here, but we did meet some of those famous people, and we did find some answers, but we both returned, - not together or at the same time- to marry our sweethearts and finish our formal education. We both earned degrees in mathematics and science, including PhDs, and we both did post-doctoral research in several fields.

After Lora Lee called Monday to tell me that her father had left this earth behind, I posted a recent picture of the two of us together and a short notice on Facebook. It said:

Dr David M. Stewart exited this life this afternoon, I think this was the last picture taken with my best friend. We were on our way to enjoy dinner together at a local Mexican restaurant. We met as college freshmen in 1955, and have remained best friends all these years. I mourn the loss of his physical presence, but celebrate his exemplary life! He was a blessing to this world and will be remembered as one of the great minds of his time.

As of this morning, there have been 620 likes, 225 comments, and 72 shares, attesting to how many people held David in high regard. I’d like to end my tribute to David by reading a few of those comments:

“A most intelligent and humble man who changed and impacted my life in so many ways... The Holy Spirit led me to Dr. David Stewart and his beautiful teachings … I know his spirit longed to be with his beloved wife, Lee, who passed on a few years ago, and I am glad that they are now reconnected.

He was a brilliant man and has blessed us all with his work and writings. He will he missed.

He touched my heart, the first time I heard him speak

I loved him from his books and videos and knowledge that he provided. May he rest in peace. He did great work here on earth.

A great mind, student of life, kind personality, and wonderful teacher. We will all miss him.

He is a precious soul and moved mountains in this world. His education, gentle wise spirit, books and so much more left a lasting imprint on so many.

Such a blessing to this earth! Wonderful man who shares his wisdom! What a wonderful man. I love how Dr. Stewart used his genius to simplify things for us. He changed the world for the better.  Wishing you peace Dr. Close as you remember your dear friend.

Such a wonderful scholar he was and what a Blessing to all who knew and loved him. He will live on in our hearts and minds as we continue to reference his materials! I am so, so sorry for your loss.

May he rest in Eternal Peace ! We will be forever grateful for his dedication

A life well lived. He has indeed left an indelible impression on the world.

He left the imprint of 'God's love in molecules' for all who were eager to learn from him. He will be missed, and I am sorry for the hole left in your heart. What as lovely friendship.

David Stewart was a precious friend and WHAT A GIFT TO THE WORLD!!!

We have lost a giant of a man of character and a library of knowledge that we benefit from every day. You will always be a remembered pioneer in God’s remedies for health.

David was a great soul who dedicated so much to the betterment of humankind. Thankfully, his great books hold his research and knowledge. He now rests with God. Blessings to you.

Feeling sad today for the loss of this giant! So sorry, Ed, that your best friend has moved on to the heavenly spheres where I am sure angels have been welcoming him home and where Lee is waiting with open arms!  When I took a CARE seminar with him in 2004… I was blown away by his loving warmth, inclusivity and unconditional love! I learned a lot, but …my experience of his loving kindness changed me forever.

His  lifetime friendship and collaboration with you. Dr. Close will continue to pave the road for the future of post-materialist science and innate knowledge that our souls/consciousness live on through eternity.”

When I think about Dave’s departure from this world, I remember what Jesus said in John 14:2: “In my Father's house are many mansions: if it were not so, I would have told you. I go to prepare a place for you. And I will come again, and receive you unto myself.”

Today, one of those mansions has a new resident.

His name is David Mack Stewart.