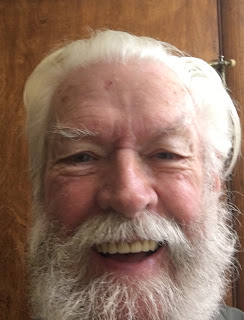 And God said, “Let there be light,” and there was light. Genesis 1:3

To most people, the word light just means visible light, but physicists have discovered that visible light is just a tiny fraction of an existing spectrum of electromagnetic radiation. Most physics texts define the radiant energy that includes visible light, as “a transverse electromagnetic wave” that moves through the vacuum of interstellar space at the enormous velocity of 186,282 miles per second. That’s more than 670 million miles per hour. But, if light is a form of energy that travels in waves, like the kinetic energy of a rock thrown into a pool of water travels in waves in the water, we must ask: What is it that oscillates in the vacuum of empty space? If that isn’t enough of a puzzle, a little farther along in the physics text, we find out that light can travel at this tremendous speed either as little energy packets called photons, or as waves of electromagnetic energy, as indicated in the definition, depending on how we choose to measure it!

But it gets even worse! In the delayed-choice, double-slit experiment, we learn that light is neither particle (photon) nor wave, until it impacts a receptor, like a photographic plate or a screen. Until then, it is only describable a mathematical expression called the Schrödinger wave equation, which is a probability function. That means that it only gives us a range of probabilities concerning the location of the photon or wave, but reveals nothing about its physical characteristics, such as whether it is wave or particle. That is not revealed until it impacts a receptor. So, we must ask: why? In my opinion, the Close-Neppe discovery of gimmel answers that question. I will explain more later in this post.

Scientists, pretty much like most human beings, fall quite easily into the self-delusional trap of thinking that naming something is the same as knowing what that something is. The definition of light is an excellent example. Look at the definition quoted above again. It sounds very scientific and may convince the reader that the physicist who wrote the book actually knows what light is. Nothing could be further from the truth! Almost everything mainstream science theorizes about light is vague, and even paradoxical like the question of its particle-wave nature, and certainly only scratches the surface of an understanding of what light is. Exactly what is a transverse electromagnetic wave? It’s a self-propagating wave of energy that consists of two forces, electric and magnetic, energetic pulses that manifest in vectors that are at right angles to each other. The electric charge alternates from positive to negative, while the magnetic force alternates from attraction to repulsion, and the whole thing travels like a juggler on a unicycle in a direction which is at right angles to both of the directional electromagnetic forces. The neat little diagrams of electromagnetic waves that we find in physics books tell us about as much about light as a cardboard cutout of a cartoon picture of a man tells us about human beings.

In the Neppe-Close Triadic Dimensional Vortex Paradigm (TDVP), reality consists of dynamic mass, energy, consciousness events occurring in a nine-finite-dimensional domain, embedded in a 10th dimension which is transfinite, embedded in an infinitely continuous conscious substrate. Gimmel is the link between the 3S-1t (three dimensions of space and one quantum of time) domain that is available to our physical senses and the infinitely continuous conscious substrate. And light is the actual form of the infinitely continuous conscious substrate.
What is light? Nothing less than the physical manifestation of Primary Consciousness. The reason light does not exist as particle or wave in 3S-1t until it impacts a receptor, is because it is the impact on something perceptible to our senses, that causes it to manifest in 3S-1t. This explains the double-slit experiment, the delayed-choice experiment, the EPR paradox, Schrödinger's cat, and quantum entanglement.