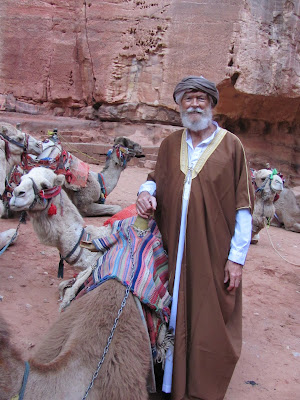 March 2010 on the Frankincense Trail in Petra

At an early age, I had experiences that, I found out later, were considered to be very unusual. They included memories of other lives, and what are now called out-of-body experiences, - OBEs. Also considered unusual, by most people, I have vivid memories of events that happened before I was one year old. I did not have to learn languages and mathematics, I remembered them. I was speaking complete sentences at nine months. My grandmother said I was “too smart to live.” - I didn't know it, but apparently I was not your normal average child.

Later in life, a world-renowned authority on intelligence identified me as a “child prodigy” and included me in a study to determine how child prodigies do later in life. But, at the time and place where I grew up, there were no programs for the gifted, and I was allowed to enjoy a reasonably normal childhood. But, different than most of my classmates, by the age of 14, I was engrossed in the works of Albert Einstein and knew that I wanted to be a theoretical physicist. Also at about that age I enrolled in a home study course offered by the Rosicrucian Order (AMORC) and read books on many different metaphysical belief systems. But my strongest interest was science and I went on to earn scholarships and degrees, knowing full well that what I was being taught in the classroom could not explain my OBE experiences.

Raised in a family of mixed backgrounds and beliefs, ranging from devout Judeo-Christians to atheists, I tended to be skeptical of religious claims and was agnostic concerning metaphysical beliefs, a position consistent with what is required of a scientist. But, while applying the scientific method and pursuing a practical career in science and engineering, I could not deny the reality of the experiences that produced verifiable information by means that could not be explained in the scientific paradigm of academic physics, chemistry and biology.

Many people have experiences that defy explanation by the current materialistic scientific paradigm, but most tend to forget, or ignore such experiences. Scientists, especially, tend to deny them and try to explain them away with elaborate rationalizations, because scientists are ostracized from the mainstream scientific community and denied grants and tenure, and even in some cases lose their jobs if they even talk about such experiences. Also, it appears that for most people, strange childhood experiences tend to fade away after puberty, but my “unusual” experiences did not fade away with age. In fact, they continued, and even intensified, prompting me to leave the mainstream and pursue independent research, that eventually led to the publication of three books: “The Book of Atma”, 1979, “Infinite Continuity”, 1990, and “Transcendental Physics”, 1997; books that posit that consciousness, not matter, is primary.

In 2008, I was admitted to the International Society for Philosophical Enquiry (ISPE) based on documented IQ test scores well above the society’s entry level. As I advanced rapidly to the highest earned level in ISPE, Senior Research Fellow, I became acquainted with Dr. Vernon Neppe, MD, PhD and we began to work together on a consciousness-based model of reality. This work intensified after we met in person in Amsterdam in February of 2010, resulting in the production of a number of technical papers and our first book together, “Reality Begins with Consciousness”..


As I mentioned above, my experiences challenging conventional scientific explanation have not subsided. In 2010 in the Great Pyramid in Egypt and in the Ancient City of Petra, in Jordan, I experienced a series of OBEs during which a lot of interesting information was downloaded into my brain. Much of it was visual and mathematical, but when it was verbal, it seemed to be a mixture of ancient Egyptian and Aramaic. I find it very interesting that my DNA, analyzed recently, while from mostly European gene pools, contains traces from the Middle East and Northern Africa.


Update November, 2019
Since writing this, Dr. Vernon Neppe and I were blessed by receiving several awards, including the Whiting Award from the International Society for Philosophical Enquiry for our work, and I was elevated to the rank of Diplomate by the largest vote on record of the membership of ISPE .

Because of my writings and my work with Dr. Neppe, I was invited to be part of the Academy for the Advancement of Postmaterialist Science (AAPS Global) and attended the first meeting of the founders at Canyon Ranch near Tucson AZ in August, 2017. I was asked to contribute a chapter to the academy's first published volume, Is Consciousness Primary? which was published in 2019. My wife of 43 years ascended to the subtle realm of higher dimensionality December 15, 2018, after writing much of the material that went into our third book together, Secrets of the Sacred Cube, A Cosmic Love Story, published in September, 2019, just before my interviews on New Thinking Allowed with Jeffrey Mishlove.

Information on how to get Secrets of the Sacred Cube, A Cosmic Love Story
http://www.erclosetphysics.com/2019/10/autographed-copies-of-secrets-of-sacred.html
Is Consciousness Primary? [my contribution is Chapter 4 and Appendix A]:
Http://www.Amazon.com Search for “Is Consciousness Primary?”
New Thinking Allowed ERC Interview No. 1: The Delayed-Choice Double-Slit Experiment Scheduled for release October 11
https://www.youtube.com/watch?v=ZXqRnad00dI&t=1161s

Links to all six of my interviews with Dr. Mishlove are posted on this blog under New Thinking Allowed.