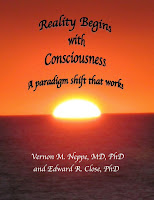 SECTION A: THE FUNDAMENTAL PERSPECTIVE

“Every day I remind myself that my inner and outer life are based on the labors of other men, living and dead, and that I must exert myself in order to give in the same measure as I have received and am still receiving.”
Albert Einstein

Priorities
Reality Begins with Consciousness presents a sweeping new paradigm shift that we know will be greeted by a wide range of reactions. A few will embrace it, many will be stunned by it, and those with vested interest in a materialistic worldview will react with hostility. We find it extraordinarily important because it provides what appears to be a broad solution to our world: The paradigm we present provides explanations that fit both our conventional, usual physical experiences, and yet seamlessly elucidate how those experiences that are regarded as bizarre, strange, anomalous and unexplained, such as out of body experiences, or awareness of information from afar, or even alleged life-after-death, or some of the unexplained mysteries of physics may be explained.
So let’s explore these areas developing a theoretical explanatory model. We recognize this adventure may be very complex because the nature of reality is deep and unexplained. And this book deals with reality, consciousness and origins. So our adventure, by its very nature, is also elaborate, intricate, involved and complicated. But we think it will greatly enhance your understanding of our existence . Therefore let’s begin gently with certain fundamental principles in this, our first Chapter, move on to 100 ideas in Chapter 2, and then move onto the “meat” of this exciting voyage.
But let’s begin with some important broader principles: A new theory incorporating elements that lie outside the scope of the existing scientific paradigm will always meet with resistance: And this is as it should be. All of the major advancements, which Thomas Kuhn23 called “scientific revolutions” or “paradigm shifts”, like those brought about by Copernicus and Kepler, Newton and Leibniz, Einstein and Bohr, challenged long-held assumptions and were met with great resistance.
Yet a new theory should never be rejected out of dogged adherence to belief in pre-existing fixed assumptions. If the new assumptions are correct, or even just more correct than the old, they will eventually win over open-minded scientists and thinkers.
Every scientific theory is based on preconceived (“a priori”) assumptions: Since they are a priori, by definition, no matter how correct they appear to be, there is always the chance that they may be wrong. This certainly applies to the tacit assumption of modern science that everything can be explained in terms of matter and energy interacting in time and space as we now understand them, and that consciousness is an epiphenomenon of material complexity. This new paradigm challenges this belief. But we are not just replacing one belief system with another, we present cogent arguments based on empirical evidence from relativity and quantum mechanics, and we provide new mathematical and logical frameworks to support the new paradigm.
What we are requesting our readers to do, is keep an open mind until you have seen the whole picture. It will involve learning a number of new concepts and new terminology. If you will do this, we believe you will see the unfolding of a comprehensive new paradigm that will expand science to encompass aspects of reality heretofore excluded from the scientific search for truth.
In this book, Reality Begins with Consciousness, we present to you some remarkable ideas supported scientifically and mathematically. We realize it may be valuable for the reader to, at least, encounter our major points of emphasis now, then to read our overall paradigmatic statement, and then to devour a broader one hundred points about our model and then begin. We only then develop our detailed theme. We’re not referencing them at this point, simply stating principles. We believe that this will assist more in comprehending our ideas than disclosing these summaries only many chapters later, because at any point you can return to these summaries.
These initial statements in Chapters 1 and 2, at this point can be perceived as equivalent to abstracts that are non-referenced. But we have endeavored to support every component of this model with appropriate sources spread through the body of this book. There are many new ideas in this chapter (Chapter 1). They contain brushstrokes. However, with several headers below, there are also many new terms or phrases you may be unfamiliar with. The object is to prioritize your reading.
If you have not read about this model before, may we make a suggestion?
·        First please read the section below on the Brief Summary of TDVP, but only the italicized sections first. This way you will obtain a perspective, without the detail.
·        Then please re-read this chapter a second time, this time including the regular print.
·        If needed, thereafter, please refer to the glossary above (or the supplemental book Glimpses and Glossary) for terms that you may not recognize, and please use these pictorial representations (“glimpses”) to further conceptualize our points.
We effectively are subdividing this into Chapter 1A and 1B. Chapter1A contains just the italicized sections; and then you look upon the regular font as, Chapter 1B, which amplifies those sections.

The Brief Summary of TDVP

1.     The Model:
In this book, Reality Begins with Consciousness, we propose a model that appears to be the first comprehensive paradigm that can be explained consistently in science, mathematics and ultimately, as a consequence of the scientific and mathematical analysis, philosophy. The model is applicable in all the known sciences—the broader physical, psychological, biological and consciousness sciences. Hence it is not only a paradigm for one science, it is a “metaparadigm”, with the prefix meta- referring throughout this book, to a higher or broader level, in this case a broad ranging paradigm.

2. Language:
Because TDVP is a wide-ranging metaparadigm that works empirically and mathematically, involving Dimensional Biopsychophysics, it requires:
·        a new language at times as there are new concepts;
·        clear and precise well-defined terminology, to avoid ambiguity and
·        well-defined ideas that take into account all of Dimensions, Infinity, Consciousness, Tethering and Unification (mnemonic: DICTU).

3. TDVP: What is it?
Our model is called Triadic Dimensional-Distinction Vortical Paradigm (TDVP). The consequent philosophical model is called Unified Monism.
These terms are technical but are given as a broader perspective here. We explain them in more detail throughout this book.
·        Triadic Space, Time and broader ‘Consciousness’ tethered together
·        Dimensions of extent involving mathematical distinctions
·        Vortices involving curved movements. These individual vortices interface across dimensions (we call this “vortices indivension” allowing a communication system). The finite is a 9 dimensional (9D) vortical reality, and the transfinite is a 10th plus dimensional vortical reality.
·        Paradigm (Metaparadigm /Theory of Everything) across the sciences and mathematics with unification of the infinite and finite resulting in the philosophical model of Unified Monism
·        The implications of TDVP lead to “Unified Monism” (UM), a new philosophical model.


[1] In every chapter, we cite a reference on which it is based. This is derived from a series of peer-reviewed articles over two years published in the DIJECA (Dynamic International Journal of Exceptional Creative Achievement). The articles in both books, Reality Begins with Consciousness and later on Space, Time and Consciousness are featured in this special series of 12 journals for 2012 and going into 2013. DIJECA is the first dynamic journal, which archives previous versions, but allows upgrades of specific articles to ensure they are current. Each article contains an abstract, too.