MEMORIES, 8th Installment
(Scroll down for earlier installations of MEMORIES or Type "Memories" in the search box.)

THE ANCIENT HOLY LAND OF INDIA
©Edward R. Close 2018
Going through customs in New Delhi was not much easier than in Jeddah. There were long lines and mass confusion. But we had a friend waiting for us once we made it through. Yash Pal was a geochemist I had met in Florida when he was part of scientific exchange program between the US and India. He was from Chandigarh, but he worked for the Indian Government, and he and his wife and young daughter lived in New Delhi. He helped us get our luggage to the hotel and get checked in. New Delhi was like an oasis compared to Yanbu. There were trees and grass! We stayed in a five-star hotel. Joshua climbed trees in the park across from the hotel, rode on an elephant and played with the snake charmers and snakes on the street.

After we were settled in, Yash Pal gave us a tour of Delhi after which we enjoyed a wonderful meal with him and his family in their home. While in Delhi, we visited Humayun’s Tomb, which was built about the same time as, and in the style of the more famous Taj Mahal. We also visited the Qutub Minar and the mysterious Iron Pillar which stands nearby, inside the ruins of an Islamic Mosque which is part of the Qutub Complex. The Iron Pillar, however, is pre-Islam. It predates the Qutub Complex by nearly 1,000 years, and has Sanskrit inscriptions honoring a Hindu King named Chandra and the god Vishnu, one of the three primary forms of the Hindu Godhead: Brahma, the creator, Vishnu, the sustainer, and Shiva, the destroyer. The Hindu heroes Rama and Krishna are said to be incarnations of Vishnu. 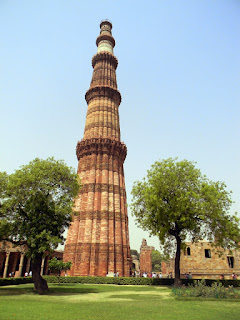 Indian scholars claim that Vedic writings describe ancient mathematics and technology equal to, and perhaps beyond today’s most advanced science. The Iron Pillar of Delhi is cited as an example of Vedic metallurgy unequaled today. Determined by modern analysis to be 98% iron, the pillar has not rusted in 1600 years. This is thought to be due to a unique mixture in the non-iron 2%, of phosphorus, brass and lead. 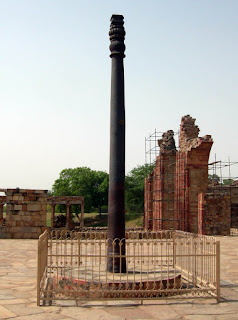 The Iron Pillar of Delhi

We were told that anyone who could stand with his back against the pillar and reach around it to clasp hands on the other side, would be blessed with long life and fame. Another version was that Vishnu would grant the wish of anyone who could do that.

I have long arms, so I backed up to the pillar and reached back. My arms were just long enough. When I grasped the fingers of my left hand with my right hand, bystanders exclaimed “Look! He does it!” in English and Hindi. Apparently, no one else in the crowd had been able to do it.