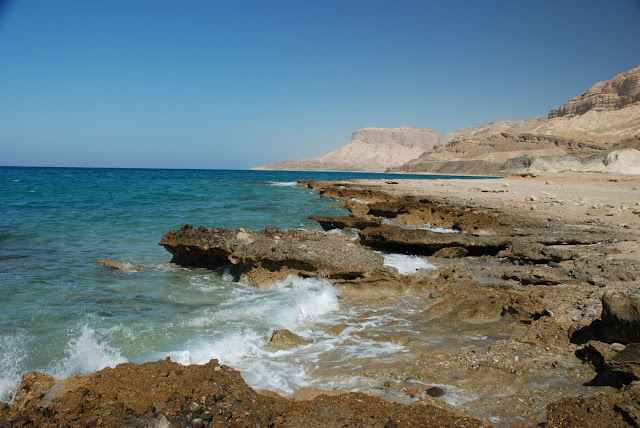 CONFLICT AND A MATTER OF PRINCIPLE
©Edward R. Close 2018
Surveys began in the early1970s to find the best place on the Arabian Coast of the Red Sea to build oil refineries and a deep-water port. It would be the west end of the Trans-Arabia Oil Pipeline. The mouth of the Wadi Al-Farah, just south of the ancient city of Yanbu Al-Bahr was chosen. (Wadi is an Arabic word meaning dry wash) A new city was to be built here with three refineries and the infrastructure to sustain related industries and about 90,000 inhabitants. Another new city was to be built at the other end of the pipeline, on the Persian Gulf. It would be called Madinat Jubail Al-Sinayah.

The day after I arrived, the PM (Project Manager) of the Engineering Department took me on my first tour of the site. He asked me to point out and make note of any environmental problems I saw. There were plenty. As we drove along the eastern perimeter of the site, I noticed a concrete culvert on the Haul Road that had been constructed parallel to the north-south Jeddah-Yanbu Highway. It was positioned strangely, half way up the steep side of a ravine at the side of the wadi. I asked the PM to drive up there. Sighting along the culvert, I could see that it had been placed exactly opposite an existing culvert on the Jeddah-Yanbu Highway. The ravine, however, curved around, intersecting the Haul Road several hundred meters north. Since there was no culvert there, the Haul Road fill was like a dam. Apparently, someone back in the Company Headquarters in Pasadena had placed a “T-square” on a map and drawn a line perpendicular to the parallel roads to indicate where the culvert should go. The amazing thing was that the construction crew had built it there! They had completely ignored the very obvious topographic features. I remembered a civil engineer back in Pasadena saying to me, when he learned that I was going to Yanbu:

“Why do they need an environmental engineer over there? It’s nothing but a damned big sand box!”

The fact is, desert environments are more fragile than most.

The PM acknowledged the improper location of the culvert and said:

“Do you think it will be a problem?”

“I know the mean annual rainfall here is only about eleven millimeters,” I replied, “but when it does rain up in those mountains, it could cause a flash flood here, like it does in the Desert Southwest back home, and the roads could be washed out.”

About a month later, it did rain in the mountains and the roads were washed out.

A French environmental firm had completed an environmental survey of the area and an environmental impact study. I found their reports in the planning Department files. The French scientists had done a thorough job and presented several conclusions with specific recommendations. But apparently, no one had read them, or, if they did, they ignored them. I was shocked when I toured the ten-by-twenty-kilometer site, to find that virtually all of their recommendations had been ignored. When I asked my immediate supervisor about it, he said that all their recommendations had been considered by Company management. He said I shouldn’t worry about it, and warned me that I had better not do or say anything that would impact the construction schedule.

I was assigned to the Planning Department. My immediate supervisor had no environmental training, was not an environmental planner, or even an engineer or architect. I discovered that he was a real estate developer from Florida who happened to be a friend of the assistant to the Company’s project Director. PM positions here paid from two to four times the salaries they commanded back in the US. My boss was here to make a bundle of money to invest in Florida real estate, period. He gave me assignments that made no sense. He gave me a task that would take a team of five men a week to finish and demanded it on his desk by the end of the day! With some reluctance, I went over his head to the Head of the Planning Department, a Scotsman with legitimate planning credentials, to complain. He acknowledged my dilemma and said:

“When he gives you an unreasonable assignment, bring it to me, and I’ll straighten it out.”
On my first tour of the site, I had noticed a large tree standing about the middle of the site, inland from the mangrove stand near where the port was to be built. It was very unusual in this desert land. It was not a species I recognized, but it was by far the largest tree I had seen anywhere between Jeddah and Yanbu. About eighteen inches in diameter, it must have been hundreds of years old. The rare tree along this coast line was typically only a shrub, with trunk rarely more than a few inches in diameter, reaching no more than ten feet in height. The desert rocks and sand had been graded flat around the tree. I assumed it was to be saved. A week or so later, I came back to the area, and the tree was gone! That tree, and the mangroves growing in the salt water along the shore, were the only green things in sight for many miles.

I mentioned the disappearance of the tree to my supervisor. I told him that I assumed that it was a mistake, and that the mangroves would be saved, since the French environmental study had identified them as one of only five such stands along the Red Sea and vital to the spawning of several Red Sea fish species. Fishing was an important industry along the west coast of Saudi Arabia. His reply shocked me.

“That tree was just in the wrong place. But, concerning the mangroves, Don’t even think about it!” my supervisor advised me. “It was discussed and decided some time ago. The mangroves will all be removed, and a cornice road will be built along the shore here. Anyway, even if we left the mangroves, they would be destroyed by the first oil spill!”

I couldn’t believe that the Company was going to deliberately destroy this unique ecological system. This mangrove stand, a short and scrubby growth by comparison with most tropical mangroves, was actually a fragile link between the desert and Red Sea ecology. Mangroves grow in salt water but must have their roots in fresh water. Here at the mouth of the Wadi Al-Farah, there was an underflow of fresh ground water. That’s why the mangroves were here, and not anywhere else along this stretch of coast. The existence of this large wadi mouth, nearly twenty kilometers wide, was also the reason that this was the best location for a deep-sea port.

I struggled with this moral dilemma. It was the classic conflict of progress and economics versus the environment. I went to my supervisor’s boss again. After listening to my concerns, he politely confirmed what my immediate supervisor had said.

“Environmental concerns simply have to be weighed against the overall goals of the project,” he explained, “Our contract with the Saudi government has clauses imposing heavy fees and penalties if the construction milestones aren’t met on time.”

I began to get the picture. I was only there to placate the Saudis’ desire for environmental oversight. I wasn’t meant to actually do anything.

This was a serious dilemma for me. I could just pretend to be an environmental engineer and draw my big paycheck. But, I really didn’t want to be a part of this deception. On the other  hand, I was afraid that if I didn’t play along, I would be fired. After a few days of serious soul searching, accompanied by sleepless nights, I decided what to do.

Every non-Saudi position in the Royal Commission had a Saudi counterpart. Eventually, the “ex-pat” positions would all be terminated, and the Saudi counterparts would take over. This plan was known as the Saudi-ization of the project. We were supposed to be training our Saudi counterparts. The Saudi counterpart of the head of planning was a pleasant young man named Hassan Reda. I went to him with the mangrove problem. He listened and advised me to prepare a presentation with maps and diagrams stating the case for saving the mangroves. He would get me an appointment with the Saudi Director General. I had little doubt that going over the heads of the Company management this way would almost certainly get me fired. But I really had no choice. My integrity as a professional was at stake.

To my surprise, I wasn’t fired. The Saudis had had the foresight to make the environmental management position a “key” position. This meant that the Company couldn’t fire me without the agreement of the Royal Commission, and they weren’t about to ask for my dismissal because I was trying to do my job! Of course, I wasn’t very popular with my supervisor after that. He did everything he could to make my life miserable, in the hope that I would give up, resign and go home.

Had I known about Young Living essential oils then, I would have been snorting the Peace and Calming and Forgiveness blends non-stop!