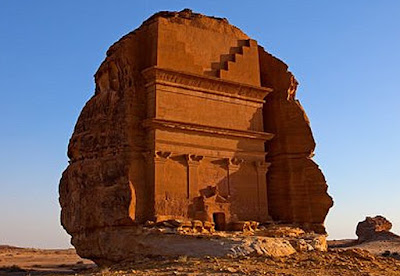 MEMORIES, 6th Installment
(Scroll down for the previous installments, or type 'Memories'  in the search box.)

ENVIRONMENTAL PROBLEMS AND ANOTHER WEEKEND TRIP
©Edward R. Close 2018
My immediate supervisor continued to try to make life miserable for me. I’m sure he thought I would fold and ask to be shipped back to the states. I learned from co-workers that this had happened several times before. I decided that I would not succumb to the pressure. The Saudis wanted me here, even if my employer did not. I had saved the mangroves, and there were other environmental issues that needed redressing.

There was a concrete batch plant located just outside the eastern boundary of the construction area with no air pollution controls, belching out dust and smoke that often hung over the construction site like a dark cloud, causing workers to cough and wheeze. There was raw sewage flowing from irrigation pipes that were supposed to be carrying clean recycled water in residential housing areas. There were two thousand North Korean workers in a camp designed for one thousand. Raw sewage was running into the desert from their over-burdened sewage treatment plant. There was a huge illegal excavation pit just outside the northern boundary where sub-contractors were stealing fill dirt. The workers called it the “Grand Canyon”. And I was sure these were just tips of the iceberg, as the Company pushed to finish on schedule and get the most out of the situation, even if it meant devastating the environment behind the Saudi’s backs.

My supervisor continued to try to get me off track by sending me on wild goose chases and assigning meaningless busy-work projects. But I was on to him. From a technical engineering point of view, he didn’t have a clue! I also began working on a set of environmental regulations based on USEPA regulations adjusted for the climate and conditions here in the Kingdom of Saudi Arabia.

The paperwork for getting my family over was continuously delayed. Multiple reasons were given. When about twice the time they had originally promised had passed, I decided it was time to go over their heads again. I went to my friend Hassan. After hearing my complaints, he asked if my wife and son were requesting 90-day visitor’s visas or residence visas. When I answered that we wanted residence visas for the entirety of my contract, he said there should be no problem. He picked up the phone, spoke rapidly in Arabic to someone at the Ministry of Immigration in Jeddah, and then to someone in Company administration. When he hung up, he said: “Your family’s Visas will be sent to Pasadena tomorrow.”

With this problem solved at last, I relaxed a bit and Giorgio, Doug and I planned another trip out of camp for the next weekend.

“Why don’t we ask Admin for our documents: igammas (Saudi work permits) visas, etc. so if we get stopped, they won’t throw us in jail?” I suggested.

The Company took all of our travel documents, for “safe keeping” when we arrived in the Kingdom.

“No,” Giorgio replied, “I tried that, when I first got here. They keep our passports, so they can control us. They just say no and warn you to stay close to the work site. They do allow us to go to Yanbu Al-Bahr, to shop or eat in the Al-A’rish French–Lebanese restaurant and to the Sharm without papers.”

Doug and I weren’t as brave as Giorgio, but we did want to get away from the job site!

“I know what we can do!” Giorgio exclaimed. “We can drive up to the Sharm, put on Bedouin garb and drive all the way to Petra, if we want! Are you guys game?”

Giorgio could pass for an Arab. He was dark with black hair and moustache. Doug, maybe … But me? I’m very noticeably white.

Giorgio laughed. “Haven’t you ever heard of makeup? And, anyway, not all Arabs are dark.”

So, we hatched a new plan, and the next Friday we carried it out. North of the Sharm was the village of Umm Lajj, from there, we could see some beautifully rugged mountains, looking like the exaggerated dorsal fins on a dragon’s back, stretching from near the Red Sea into the Hejazi range. I was excited to see what those mountains were like.

We stopped at the Sharm and donned our Bedouin clothes, -supplied by Giorgio. Giorgio was about four inches shorter than me, so my thobe was a bit short, but because desert wear is intentionally loose-fitting, it wasn’t a problem. The Saudi head gear, the ghutra, could cover my Northern European complexion, and sunglasses hid my blue eyes.

As we were driving north, past Umm Lajj, I shouted over the engine and wind noise:

“Can we really go to Petra?” I asked. “Petra is across the border in Jordan. Don’t we need a passport with exit and entry visas?

“I bet there’s no border guard or check point there.” Giorgio responded. “It’s in the middle of nowhere, a desolate area, sparsely populated with wandering nomads, and if there is a check point at the border, we’ll just turn back, and go off-road around the check point.”

I thought about the "wandering Nomads" that had chased us out of the mountains a couple of weeks earlier. Doug and I looked at each other. I could see some concern in his eyes.

“Petra is too far.” Doug declared. “I’ve looked at the map, and it’s still five or six hundred kilometers from here. We have to be back in our offices in Yanbu tomorrow morning.”

“Oh, I’ve disappeared for a couple of days before;” Giorgio grinned, “they didn’t send out a search party.”

“Yes, Giorgio,” Doug replied, “but you’re known for not playing by the rules. If the three of us go missing, they may well become suspicious.”

“Yeah, if I’m discovered to be AWOL, my supervisor will use it to get me sent home,” I ventured, “I’d really like to see Petra, but I think we need to be back in Yanbu before morning.”

We ventured on toward Jordan, but after dark we took a wrong turn and were lost for a time, somewhere northeast of Tabuk.  I judged that we were still about a hundred kilometers from the Jordanian border. At one point, we drove past a monolithic rock outcrop standing apart from the mountains in the desert. We pulled of the road and aimed the headlights at it. There was an ornate edifice carved into the rock face. “Had I miscalculated our position? Could we already be in the out-skirts of Petra?” I wondered.

We tried to climb up to the shadowy entrance, but we only had one flashlight, and the jumble of rock in front of the edifice made it too dangerous. We climbed back into the jeep and drove on for fifteen minutes or so. Finally, as Doug and I expressed concern, Giorgio agreed to turn back. After a long, tiring drive, we were back in our bunks before daybreak, with just enough time for a short nap before starting our next ten-hour day, six-day work week.

I learned later that what we saw was probably part of Madain Saleh, also called Al-Hijr, a site within the borders of Saudi Arabia, much smaller than, but similar to Petra, and believed to be the southern-most remains of the Kingdom of the Nabateans, the people who built Petra as the hub of the Frankincense Trail, almost 2,000 years ago. Looking at the maps, I determined that we had probably been within one hundred kilometers of Petra. So close, and yet so far away! Something about the stately edifices carved into the sandstone cliffs fascinated me and beckoned to me. But it would be nearly 40 years before I would get another chance to see the Ancient City of Stone!