WHAT DOES IT ALL MEAN? 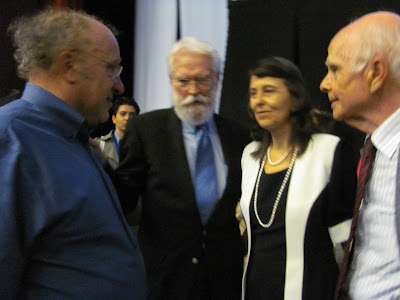 Discussinng the Nature of Reality


My study and research over the past 60 years (1955 to 2015)* has taught me that the things we think are the most real of the real are actually illusions. Based on my research and experience, I agree strongly with Max Planck who said “…there is no matter as such…” and Albert Einstein who said “Space-time is not something to which one can assign a separate existence.” And “Time is an illusion, albeit a very persistent one.”

So the three things we all take to be very real every day of our lives, matter, space and time, are not what we think they are!

TDVP TRUE analysis reveals the fact that solid matter melts away under close scrutiny (pun intended) and that time and consciousness, like space, are three dimensional. It also reveals that some primary form of the third form of the substance of reality, gimmel, containing logic, meaning and purpose, had to exist before any stable physical structure could form.

About the same time British physicist Steven Hawking and mathematician Roger Penrose declared that they had proved that the universe originated in a mathematical singularity, a dimensionless point of infinite density, I submitted some of my ideas, including 3-D time, which implies no beginning or end to physical reality, to Stephen Hawking, who responded that he could not imagine three –dimensional time. Later, he stated that it might be wrong to speak of absolute beginnings or endings with respect to the universe; but as far as I know, he still has not imagined 3-D time, or taken consciousness to be a meaningful part of physical theory. I met Sir Roger Penrose briefly in 1996 at the ‘Toward a Science of Consciousness II’ Conference at the University of Arizona in Tucson, and our theories seemed nearly compatible.

So what does it mean to say matter, space and time are not what we think they are? Or, perhaps the more important question is: What are they?

The Close-Neppe TDVP (Triadic Dimensional Vortical Paradigm) generally agrees with Planck’s conclusion that the illusion of matter is created by energy. TDVP says elementary particles are actually vortexes of energy existing across multiple dimensions. We also agree with Einstein’s general theory of relativity that space-time is an extension of the substance of reality, but TDVP goes beyond both relativity and quantum theory, determining that the substance of reality exists in three measurable forms: inertial mass, energy and gimmel, a pervasive form of consciousness. So the illusion of solid matter is created by vortexes of energy, and energy is a manifestation of the substance of reality created by the meaningful
drawing of distinctions in the conscious substrate of reality.

What does it all mean? It means that your consciousness, as part of the pervasive consciousness that had to exist before any stable physical structure could form, creates its own reality within the hyper-logical structure of Primary Consciousness. It means that, within the limits of Primary Logic, affected by the will and actions of other conscious beings, you actually create your own reality, your own timeline through space-time, and you can always learn how to do this better. It means that the physical universe has a deeper meaning and purpose than science has so far supposed, that physical reality is an illusion, and that there may be a more real domain than the physical reality we experience every day, --as all the spiritual masters of all ages have claimed.