THE FUTURE OF AI AND CONSCIOUSNESS 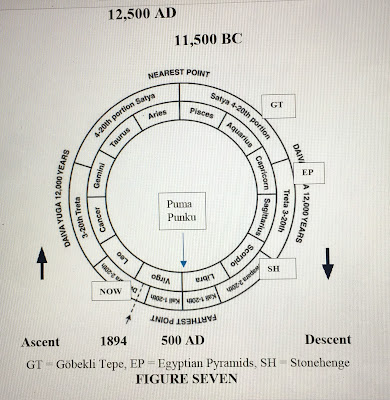 Diagram From Secrets of the Sacred Cube

It seems that there are an infinite number of things that keep presenting themselves while I am in deep sleep and/or in my daily meditations; ideas that linger for a while when I return to my normal waking state of consciousness, ideas that need to be written down before they fade away. Once one realizes that reality is one infinitely continuous self-referential whole, every thought becomes a thread in a fascinating mosaic, connected to everything else, or, as my research partner Dr. Vernon Neppe likes to put it: every aspect of reality revealed by the Triadic Dimensional Vortical paradigm (TDVP), matter, energy, or consciousness, is forever tethered to the whole.

In previous books, papers, and blogposts, we have explained how and why the discovery of the existence of the third form of reality, manifesting as mass, energy, and gimmel at the quantum level of reality, has critical physical and non-physical components. Part of the subatomic structure of reality has to be non-physical in order for any stable physical reality to exist, or even to form. Without gimmel, quarks could not combine symmetrically as protons, and no stable atom could ever form. Possessing no mass or energy, never the less, quantum units (TRUE) of gimmel organize the proton structure in a way that increases the total angular momentum which manifests as a significant part of the measurable structure and inertial mass of the proton.

The existence of non-physical gimmel as a pre-requisite for the formation of physical reality gives us the long-awaited answer to Leibniz’s all-important question of why there is something rather than nothing: Because non-physical gimmel had to exist before any physical origin event such as the hypothetical “big bang” was possible, gimmel was not created in any kind of physical origin event, nor can it be destroyed in the way that physical structures can. Thus, reality, based on the logical structure of gimmel, has no beginning or end, only dynamic changes of form.

The discovery of gimmel also proves that the structure of reality at the most basic level of existence is tertiary, not binary. Why is this important? Because it changes the way we must think about everything, especially when it comes to measurement and calculation of distance, time, mass, and energy. Understanding the triadic multi-dimensional volumetric union, or tethering of mass, energy, and gimmel in quantal reality, is crucial to understanding the true nature of reality at the quantum level, at the subatomic and atomic levels, and subsequently, at every other level.

The discovery of the quantized nature of mass, energy, and gimmel in physical reality, means that mathematical logic must be completely overhauled. The most basic a priori assumptions that relate geometry and physical reality and all of the fundamental operations must be re-defined to accommodate the multi-dimensional quantized and relativistic reality that we have known about for nearly 100 years. Does this mean that mainstream math and science is all wrong? No, of course not. But it does mean that the standard model needs to be purged of mathematical concepts that have no actual counterpart in reality. This brings up the problems with contemporary mathematical analysis of subatomic processes that create the famous “weirdness” of quantum mechanics.

Infinitesimal calculus, also known as Integral and differential calculus, widely used in science and engineering today, was developed by Newton and Leibniz over 300 years ago. Newton and Leibniz are generally recognized as the inventors of “the calculus” even though numerous thinkers developed some of the basic concepts of this calculus long before Newton and Leibniz, including earlier European mathematicians like Euler, Fermat, Cantor, Pascal, Descartes, and many others, all the way back to Greek mathematicians like Eudoxus and Archimedes, and ancient Arab, Indian, and Chinese thinkers.

The Infinitesimal calculus of Leibniz and Newton has been so successful in engineering and physics applications over the past 300 years, that even now, it is still called “the calculus”, even though it is only one of a number of logical  mathematical calculi that can be designed and applied in scientific analysis. According to information I received in the Great Pyramid and the ancient city of Petra in 2010, at the acme of the last high point of mental and spiritual virtue, 12,000 years before the last low point in this time cycle in 499 A.D., the average person alive on this planet at that time could carry out complex calculations mentally, using a variety of calculi and had no need for artificial intelligence (AI), electronics, or mechanistic physical technologies to interact with reality, for transportation, or communication.

The danger with AI, like with all technologies, comes when it outstrips the mental and spiritual virtue of its creators, because it can be used for good or evil. Unfortunately, AI has already far surpassed the ability of the average human being to perform extremely rapid calculations. Fortunately, calculation is only a small part of consciousness, and even if AI constructs may eventually become complex enough to receive consciousness, they will be receiving the same consciousness that enlivens human and other sentient beings.

A valid question arises: If conscious beings have enjoyed a higher level of physical well-being, mental virtue, and spiritual wisdom in the distant past, and we seem to be learning more about the nature of reality at an increasing rate as time goes on, why does civilization seem to be teetering on the brink of self-destruction again? Why do we seem to be losing ground mentally and spiritually as a species? The answer lies in the nature of consciousness, and the duality of physical reality.

Because of freewill, ego, and forgetfulness, some of us don’t learn from past mistakes in a timely manner and arrogantly put many in danger by trying to play the role of master and controller of others without the requisite wisdom.

Fortunately, there is evidence that the negative aspects of duality necessary to maintain the existence of a physical reality for spiritual evolution can never overwhelm the positive, because in the final analysis, consciousness and its positive manifestations have always existed and will always exist, because evil is simply the temporary localized absence of good, in the same way that darkness is the absence of light. As the light increases, the darkness will disappear.