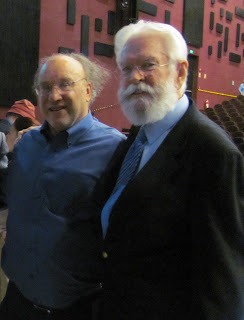 These three words, each meaning something different, are intimately related. Do they, or can they exist separately? Or do they only exist in some kind of triadic union? As human beings, with physical bodies, thinking minds, and some level of awareness, to some degree we experience all three of them, and together, they comprise the experience of human existence.

Reality, for each one of us is what we experience directly: a dynamic combination of consciousness, life, and intelligence. To conserve space and time, let’s abbreviate this as CL&I. Each human being in existence experiences reality from the perspective of a combination of different levels of CL&I. The reality we experience comes into being with our conscious drawing of the first distinction: separating self from other, and the spectrum of finite reality stretches from the electron to the whole Cosmos, while our individual experiences of reality range from minimal self-awareness to Cosmic Consciousness.

In previous posts, based on years of research, I have laid out the thought processes, mathematical proofs, and discoveries, that have allowed us to express a number of conclusions about the meaning and purpose of human existence. In those 500-plus posts, the progression is from a single quantum bottom of reality, the elementary perturbation of the Source Field, the electron, up to holistic Conscious Cosmos. In this post, I will try to look at reality from an awareness more complete that that of the average human being, perhaps even from the top down, where the top is defined as the state of Cosmic Consciousness, which is the infinitely expanded awareness of everything that exists.

At this point in planetary time, very few conscious living beings on the planet have attained Cosmic Consciousness, and it is impossible for most of us to even imagine what that state might be like. But, given that even one such being exists, how would that being see the things we are experiencing? To begin with, that being would be aware of everything: all things, all space, all time, including the content of the consciousness of every finite being. I hasten to add that I am not such an ultimately enlightened being, but I am confident that they exist. I have experienced evidence of such beings, showing the way to the positive goal of human existence.

You may consider my remarks about what reality looks like from the viewpoint of states of higher consciousness as speculations, because indeed, that is what they are. However, these remarks are based on actual experiences, some of which I have written about in earlier blogposts and publications. Relevant experiences include significant personal glimpses of expanded states of consciousness from a very early age, meetings with people far more advanced than me, initiation into spiritual practices that help expand consciousness, and in on-going inspirations that are both intellectual and spiritual in nature.

It is clear to me that those who have ascended to the state of Christ Consciousness (the Son/Daughter of God state) are aware of the 3, 6, and 9 dimensional domains of finite reality, and are in contact with the Infinite; and those who have ascended to the ultimate goal of existence, the state of Cosmic Consciousness (the Mother/Father God state) are fully aware of the entirety of Cosmic Reality, because everything is contained in the infinity of their Being. The magnificence, joy, and ecstasy of these ultimate states of expanded consciousness are so far beyond the experiences of the average human being today, that they can only be expressed by conceptional extrapolations from the average human being, to most advanced person of our experience, and beyond.

These conceptional extrapolations in 3, 6, and 9 dimensions can be expressed minimally in a self-referential model of mathematical logic. The Neppe-Close TDVP is such a model. This is possible only because reality is structured logically, like an infinitely expanding mind: The Mind of God if you will. What follows is a brief description of conceptual extrapolation through 3, 6, and 9 dimensions and the infinity of infinities, and my attempts to express them in the inadequate finite terms of human language.

In the mathematical model of reality, human experience can be represented minimally by a functional expression of CL&I, where each of the three components, i.e., consciousness, life, and intelligence, are described by quantifiable variables of extent, content, and intent/impact in the quantized finite dimensional domains, and by qualifiable variables (called “qualia”) in the infinitely continuous domain, the infinity of infinities. The variables for C, L, and I can vary from one quantum equivalence unit to infinity. With this generalized conceptual model in mind as background, I will try to describe experiences along the path of consciousness expansion, without resorting to abstract mathematical procedures any more than appear to be necessary for clarity.

As individual consciousness expands from bare existential awareness to self-awareness, the realization dawns that all real objects, events and thoughts are at least three dimensional. Single dimensionless points, extended to one-dimensional lines, and two-dimensional planes have no potential for substantial content. They are over-simplified conceptual models of real things, all of which have both extent and content.

The average person on Planet Earth today is minimally aware of three dimensions of space, one moment in time, and consciousness from one single individual point of view. Within this conceptual domain, the individual experiences the changes of content and intent/impact as events happening in 3D space along a personal timeline. Thus, time is experienced in a linear fashion, and may be represented by a line connecting remembered past events with present experience, and an anticipated future. The contents of these events impact the body and mind of the individual conscious being in a variety of ways. Most people today are only aware of this five-dimensional domain, consisting of three dimensions of space, a one-directional dimension of time, and one quantum of consciousness for most, if not all of their lives.

Please bear in mind that in this discussion, all measurable variables are not dimensions. Dimensions are only measures of structural extension in the field of existing objects. Only three things have extension: space, time, and consciousness. Other variables, like matter and energy, are measured in variables of content. They may occupy measurable volumes of space, time, and consciousness dimensional domains, depending on density, but they are measures of content, not dimensions.

Without going into the details of how and why individual consciousness may be expanded to experience more dimensions of reality, I will attempt to describe what experiencing that is like. My descriptions are based on personal experiences, explanations from spiritual guides who are now living or have lived on the Earth, and inductive and deductive reasoning.

Consciousness expansion from an average state of awareness toward Christ Consciousness and Cosmic Consciousness is actually the definition of spiritual evolution. Human evolution is not just the improvement of physical health or mental efficiency, because the goal transcends the finite limitations of body and mind.

Spiritual evolution, unless accelerated by focused spiritual practices, advances slowly over a number of lifetimes, and even the expansion of individual consciousness to include complete awareness of the extent and content of the first three-dimensional domain of this physical universe is rare at this time. However, I understand that even though we are barely out of the dark mechanical age, the first 1200 years of the ascending 12,000 years of mental and spiritual virtue in this planetary time cycle, complete enlightenment in this lifetime, while extremely rare and difficult to attain, is possible.

The mathematical projection through 3, 6, and 9 dimensional domains requires the progressive change of units of quantification from integers to “imaginary” numbers, and from those numbers to complex numbers. This reveals the fact that the logic of pure mathematics is not a human invention; it is discoverable as the logic of the dimensional structure of reality. The corresponding expansion of individual awareness brings profound differences in the state of consciousness of the individual at each three-dimensional expansion. The level of knowledge and understanding increases exponentially at the inter-dimensional junctures of 3, 6, and 9 dimensional domains.

Knowing that knowledge is power, and power can be used for positive or negative purposes, we can understand why physical, mental, and spiritual reality is structured the way it is. Effective methods of consciousness expansion are difficult to learn, and cannot be accessed or understood by an individual until the soul’s consciousness is pure, purged of negative tendencies and capable of relating all activities to the positive goals of spiritual progress. The ability to gain true knowledge of reality and use logical reasoning to focus on understanding how to limit actions to those that will promote individual, group, and cultural spiritual progress, is known as wisdom.

My next blogpost will be devoted to answering this question.