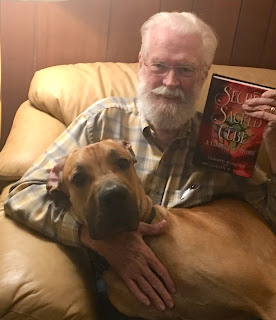 MESSAGES FROM THE HEART AND MIND

Information on how to get Secrets of the Sacred Cube, A Cosmic Love Story
http://www.erclosetphysics.com/2019/10/autographed-copies-of-secrets-of-sacred.html

New Thinking Allowed ERC Interview No. 2: The Constancy of the Speed of Light, released October 21


WRITING
I wrote my first book of poetry when I was 10 years old. The first time words that I wrote were published was when I was a freshman in college in 1955. I’ve written more than 200 technical papers, and my first book was published by Libra Publishers in New York in 1977. In the 42 years since then, I’ve authored and/or co-authored nine books, - and as long as I am alive, there will be more to come!
So, I’m a writer? No, writing is just something I do. Why do I do it? I agree with Flannery O’Connor, who said: "I write to discover what I know." I also agree with Anais Nin who said: "We write to taste life twice, in the moment and in retrospect."

In my latest book, Secrets of the Sacred Cube, A Cosmic Love Story, I have tried, as diligently as I could to reflect these sentiments, and to fulfill the words of Carl Sagan, famous Cosmologist and popularizer of science. I think he got it right when he wrote: "A book is made from a tree. It is an assemblage of flat, flexible parts (still called "leaves") imprinted with dark pigmented squiggles. One glance at it and you hear the voice of another person, perhaps someone dead for thousands of years. Across the millennia, the author is speaking, clearly and silently, inside your head, directly to you. Writing is perhaps the greatest of human inventions, binding together people, citizens of distant epochs, who never knew one another. Books break the shackles of time--proof that humans can work magic."

Finally, it was Franz Kafka, who said: "Don't bend; don't water it down; don't try to make it logical; don't edit your own soul according to the fashion. Rather, follow your most intense obsessions mercilessly."
I write, first and foremost, for myself. It’s my way of getting everything out in concrete form, so I know what I know, understand and remember. And I’m willing to share. I offer it to you, to read to ponder and think about. You don’t have to agree, but read first, with an open heart, then decide.