WHAT IS DARK MATTER AND DARK ENERGY? 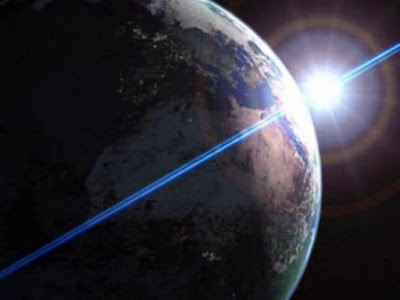 DARK MATTER AND DARK ENERGY
ARE NOT MATTER AND ENERGY AT ALL
First, let’s be clear: “Dark matter” and “dark energy” are, like many popularized scientific terms, complete misnomers. Take the “Big Bang Theory”, for example: It is a catchy title, but the origin event of the universe as it is understood by mainstream scientists today was not “big” and was not a “bang’. The only thing correct about this title is the word “theory”. It is a theory. The same is true about “dark matter” and “dark energy”. The phenomena known as dark matter and energy are neither matter nor energy. Let me explain.

In the 1930s, when Swiss astronomer Fritz Zwicky, working at Cal Tech, discovered while calculating the mass of a certain spiral galaxy, that the observed motion of the galaxy could not be explained by the amount of mass it contained. He concluded that there must be additional matter in the galaxy that could not be seen, and assumed that it wasn’t visible because it did not emit or reflect light. He therefore called it “dark matter”. His discovery was largely ignored because it was overshadowed by Edwin Hubble’s discovery at about the same time of the correlation of the red shift of light from distant stars with distance, which was interpreted as evidence of universal expansion. Besides, no one could imagine just what this “dark” substance could be.

Many years later, based on meticulous observations of the Andromeda galaxy, Astronomers Vera Rubin and W.K. Ford published "Rotation of the Andromeda Nebula from a Spectroscopic Survey of Emission Regions," [Astrophysical Journal 159:379, 1970], which documented the effects of Zwicky’s “dark matter” in that galaxy. They then continued to make the same kind of observations for over sixty other spiral galaxies, confirming the same effects in all of them, which was interpreted as an indication that the presence of dark matter was a wide-spread phenomenon in the universe. And, the effects were huge, indicating that more than 90% of the mass was missing!

THE CONNECTION BETWEEN ‘DARK MATTER’, ‘DARK ENERGY’
AND CONSCIOUSNESS
There have been some speculations, mostly by non-scientists, that dark matter and dark energy might have something to do with consciousness. Such speculations are usually related to the idea that conscious experiences might arise as field phenomena associated with the brain and other organs, and possibly even with organisms other than human beings. This kind of speculation arises, at least in part, because consciousness, like dark matter and dark energy, is not directly detectable as mass or energy in the forms with which we are familiar. Such theories are generally considered by most scientists to be wild speculation, not rising to the level of scientific hypothesis or even rational speculation, because there has been no known data or mathematical proof supporting such a connection. That is, until now.

For a long time now, we’ve known that matter is not the solid impenetrable substance it appears to be. The illusion of solid matter is created by extremely small quanta spinning at near light speed angular velocities like vortexes of energy, and the limitations of our physical senses. And now, the application of the appropriate mathematical procedures for quantum reality, the calculus of distinctions, to Large Hadron Collider particle physics data has revealed that a portion of the substance that makes up atoms at the quantum level is not detectable as either matter or energy. This means we have discovered a third form of the substance of reality, which we call gimmel. Like so-called dark matter and energy, it is only detectable indirectly because its effect on angular momenta, stabilizing atomic and subatomic structure.

Further investigation, reported in the paper whose abstract was published in the last post, shows that the proportions of gimmel associated with electron shells and with the nuclei of atoms are virtually the same, within statistical error, as the published proportions of “dark” energy and “dark” matter in the universe as calculated from data from the Hubble Probe. We have also seen, in earlier studies by Neppe and Close, that gimmel has characteristics usually attributed to consciousness. It is the organizer of logical structure and meaning that supports life. Thus it appears quite possible, or perhaps even very likely that what astrophysicists are calling “dark” matter and energy are not matter and energy at all, but are actually forms of a wide-spread form of consciousness, confirming the intuitions of many non-scientists.