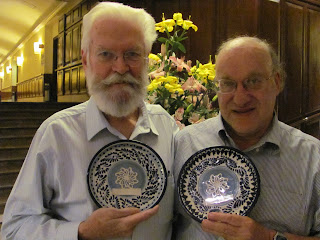 Dr. Ed Close and Dr. Vernon Neppe received the Gabino Barreda Award and gifts from the government of Mexico and Puebla of local artisan-crafted plates thanking them for their contributions to science and education. They accepted the honors during special ceremonies at the Science and Spirituality Conference in Puebla, Mexico, February, 2013.
Posted by Edward R. Close at 7:53 PM