WHAT DOES THE FUTURE HOLD?

On this Independence of the USA day, what does the future hold for our nation and the world? Read on to see what I predict.

Can the future be predicted? I will set the stage for answering this question by examining two statements that many people believe to be true. More than likely, you have heard these statements in thoughtful discussions, or even read them in print. The first is:

1. “No one knows what the future holds.”

Do you think this is true? Can you prove it that it is true? That would involve proving a negative, and this brings up the second statement, one that is often cited as one of the “laws of logic” by those who don’t know any better:

In fact, BOTH OF THESE STATEMENTS ARE FALSE!

Let’s take statement #1 first: Can psychics actually see into the future? Did Nostradamus really predict the death of the king Henry II of France, world wars and the rise and fall of the Third Reich, and a lot of other things? Skeptics point out that most of Nostradamus’ quatrains are couched in vague terms that can be interpreted in several ways. Believers counter that he had to make most of his predictions in coded form and leave out names for the most part in order not to get into trouble with the church or royalty. Being beheaded for heresy or treason was a real danger in those days! Perhaps the most convincing Nostradamus prediction was one of his first, published in 1555:

Here is the Nostradamus quatrain in question, translated from the original French:

Century 1 Quatrain 35
The young lion will overcome the older one,
On the field of combat in a single battle;
He will pierce his eyes through a golden cage,
Two wounds made one, then he dies a cruel death.”

King Henry II of France died in 1559 as the result of a jousting accident just 4 years after this quatrain was published. His opponent was six years younger than he was, and both had lions on their shields. The “single battle” in the second line is interpreted as the jousting match. The younger man’s lance was splintered and pieces of the broken lance went through the slits of King Henry´s helmet (the golden cage) and pierced his eyes and brain. The king died 11 days later after suffering paralysis, convulsions and respiratory problems – “Two wounds made one, then he dies a cruel death.”

Whether you believe that some people have the ability to see into the future or not, in some respects, the future can be predicted. In fact, that is what science is all about, using ideas, principles, and mathematical relationships that have been tested and proved to be valid, to predict the future. Given current conditions, science predicts the future locations of moving objects like elementary particles, missiles, and planets. In fact, in the 16th and 17th centuries, many scientists thought that the initial conditions of the universe could be discovered, all that of the future of the cosmos could be predicted using Newton’s laws!

More recently, science has discovered that time is not the simple linear, ever flowing forward dimension that it seems to be. See articles and papers (including some on this blog) about the double-slit and delayed-choice experiments. It now appears that the cosmos, of which we are a part, is conscious, and if we can expand our consciousness, the past present and future can be revealed. This is no longer unprovable mysticism.

Actually, any given statement, positive or negative can be either true, false or unprovable in the system within which it is stated. It’s just that negative statements are often very hard to prove or disprove, and then, of course, there’s that third possibility: negative statements that can’t be proved or disproved within the limits of what is presently known. Will they become provable when more is known about the nature of reality?

In fact, every high school algebra student learns to prove negatives. Take for example the negative statement that there are no integer (whole number) solutions for the equation X2–X= 1. This is a type of equation mathematicians call a quadratic equation, High school students learn that such equations can be solved using a simple formula, and that there will be two, and only two solutions to a quadratic equation. Applying the formula, we see that the two solutions for this equation are ½(1 +Ö-3) and ½(1 - Ö-3), neither of which is a whole number, proving the negative statement “there are no integer solutions to this equation. Notice that in proving this negative statement, we went outside the world of whole numbers, into the realm of complex numbers.

What high school students are most often not taught is that a negative statement can sometimes be proved true by turning it into a positive statement, and showing that the positive statement leads to an obvious contradiction. In the example just given, if we turn “there are no whole number solutions” into the equivalent positive statement; “Whole number values of X in the equation always produce contradictions, and show that this is true, then we have demonstrated that there are no whole number solutions to this equation, and the negative is proved. This proof is more difficult than plugging numbers into a formula, but much more revealing about the nature of mathematics and reality.

Now, do the new revelations produced by applying the mathematical logic of the calculus of distinctions and the principles of TDVP prove that knowing the future in more complete way is possible? Does this mean that there are and always have been a few people with the ability to see the future? I think so, but you can decide for yourself.

The new science and mathematics developed by Neppe and Close have proved that consciousness exists in every atom of the universe. Can we, by connecting with that consciousness, know more of what the future holds? I believe so; and speaking only for myself, I will venture to make some predictions about the future. In honor of Nostradamus, I will present my predictions in poetic form.

PAST, PRESENT AND FUTURE ARE ONE
Who are we? Where did we come from? Can we ever know where are we going?
Stepping out of our skin, we see that all is One, and we are on our way to knowing

That time is of our own invention. Drawing the distinction of self from other,
We fall into deep delusion, dreaming we are separate, each from one another.

But now, knowing that consciousness is One, we stand before an open door:
Stepping out of our narrow bony dungeons, we see the truth as never before.

Laid out before us, like a map upon the floor, the branches of cause and effect
Run, predicting timelines, through choices made, with which we may connect.

But the Spirit of the Cosmos is the driving force, the material world is incidental
To the cyclic growth of the Sovereign Soul. Cosmic Consciousness is elemental.

Like a river’s relentless ebb and flow, regardless of earthquakes, wars and famine,
The course of nature’s spinning way supports conscious spirituality, not Mammon.

So, take heart, even though we see that we’re on the brink of great catastrophe:
It is almost certain that millions will die in a brief but bloody World War Three.

Unsustainable, as they are, major cities will be destroyed in little more than a day,
With less pain and suffering than by the natural corruption of social rot and decay.

What comes after the purge will be a far better world at last, for those who survive.
With re-connection to the Cosmic Universe, they’ll be thrilled each day to be alive!

Of course, I would rather see the unhinged radicals on all sides relent of their obsessional ranting and raving, hurling insults, and resorting to violence, and turn to finding peaceful solutions, but I don’t see that happening. I think the polarization has gone too far. Unfortunately, if history is any indicator, human development advances from catastrophe to catastrophe. The bright spot in this stormy cloud of predictions is that consciousness and life, its vehicle for advancement, are intrinsic, not accidental, and ultimately, an advanced, deeply spiritual form of life will win. 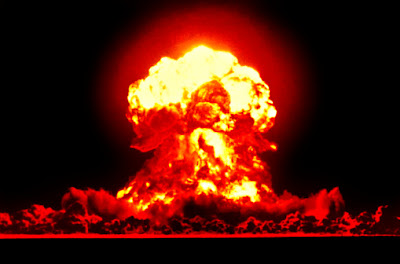